You will learn how to fix Dropbox stopped syncing problem with the 12 easy ways, try the step-by-step guide to solve Dropbox stuck syncing files problems.

Dropbox Stopped Syncing Since the Update?

Ever since Dropbox released their new update, my files have been stuck on the same few hundred files and haven't been able to sync or save anything new in over 4 months. All the while they keep charging me my monthly fee. I've reached out to support several times and none of the solutions have helped.

I've unlinked and relinked my account, have used their terminal commands, which were also to no avail. I'm using an external drive for my dropbox folder, it's not a network drive. It has worked flawlessly via this setup for over 10 years. Now with all these new updates etc, Dropbox no longer works as it did. Anyone can help me?

Why Dropbox Stopped Syncing in Windows 11, 10?

Here we list most of the reasons for Dropbox not syncing problem, and take it for reference:

12 Solutions to Dropbox Has Stopped Syncing

If your Dropbox syncing stuck, please try the below 12 solutions with the step-by-step guide for you to troubleshoot and force Dropbox to sync.

Fix 1. Correct HardLinks and Permissions within the Dropbox Folder

1. Click the Dropbox icon in your menu bar or system tray.

2. Tap the Settings icon in the top right of the window, then choose Preferences....

4. Click the Fix Permissions button to correct it. You will get the success message: Dropbox successfully repaired the permissions in your Dropbox. 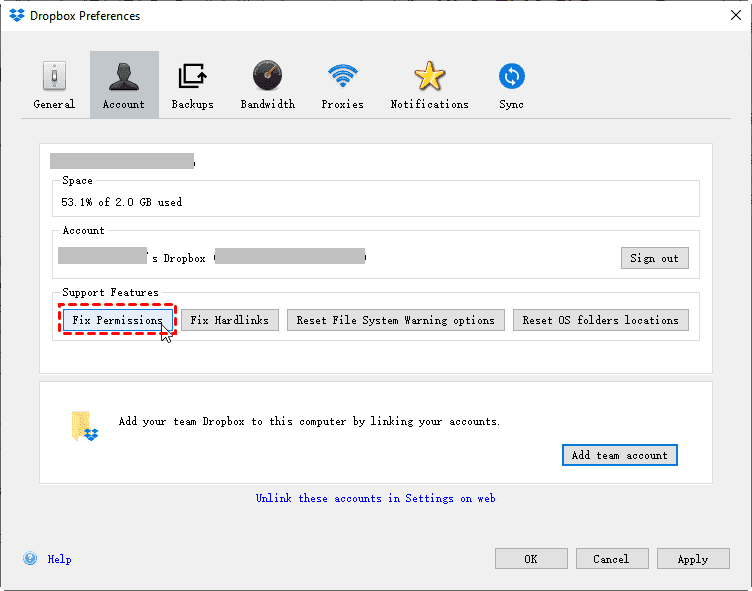 5. Then click the Fix HardLinks button, then you will get the message: Dropbox successfully repaired the hardlinks in your Dropbox and turned them into copies. 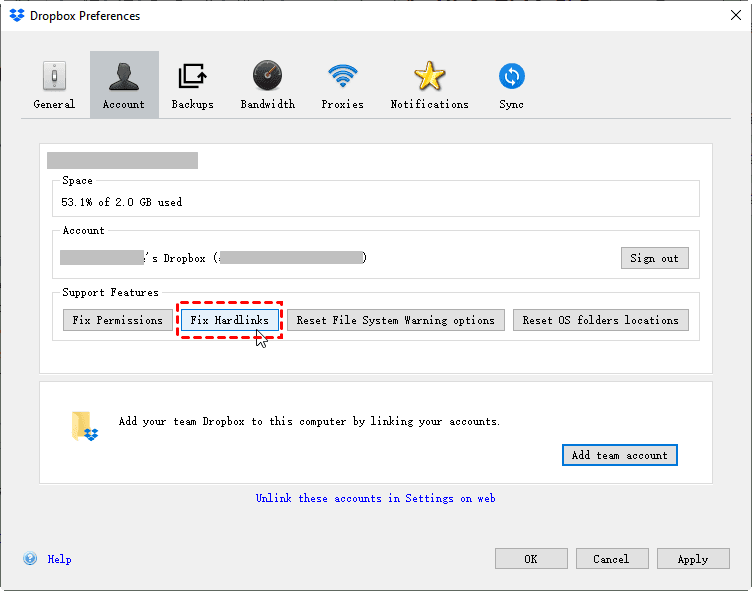 After the correction was finished, the Dropbox desktop app need a while to sync, and the Dropbox stopped syncing problem is solved. Or restart the Dropbox app to check if it’s solved.

If you get this error, it’s better for you to delete unnecessary files in the Dropbox folder, or upgrade your Dropbox account to get more storage space. Then Dropbox stops syncing problem should be solved.

Dropbox will stop syncing files If the files are used by another program, and Dropbox stopped syncing will occur. Now save and close the file completely once when you’re done, and close the application you’re using. Then Dropbox will sync it to the cloud.

And Dropbox will not sync files of the file name over 255 characters.

If your computer encounter a low disk space error and Dropbox stopped syncing problem might occur. All that you could do is delete files to free up space or add another hard drive to expand the storage. Then the Dropbox stuck syncing files will be fixed.

If your Dropbox stop syncing specific folder, you can go to the Dropbox desktop app to see the Dropbox sync issues, and there will list all the files Dropbox cannot sync, and the reason why Dropbox stopped syncing.

2. And you will see all the files Dropbox cannot sync. 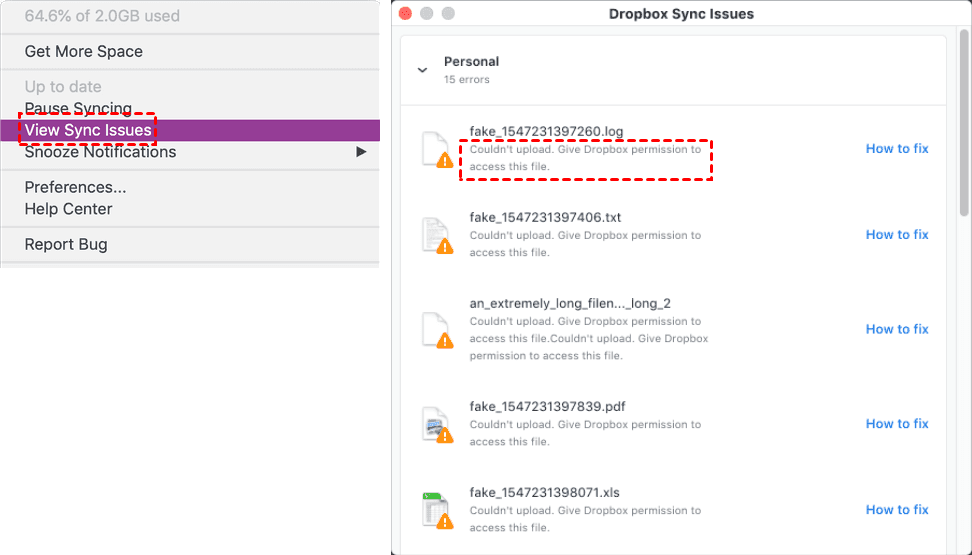 You could change the file permissions according to the following commands:

3. Run the following commands to change file permissions for Dropbox:

Tips: Change the C:\Users\YourUserName\Dropbox to your Dropbox folder location. 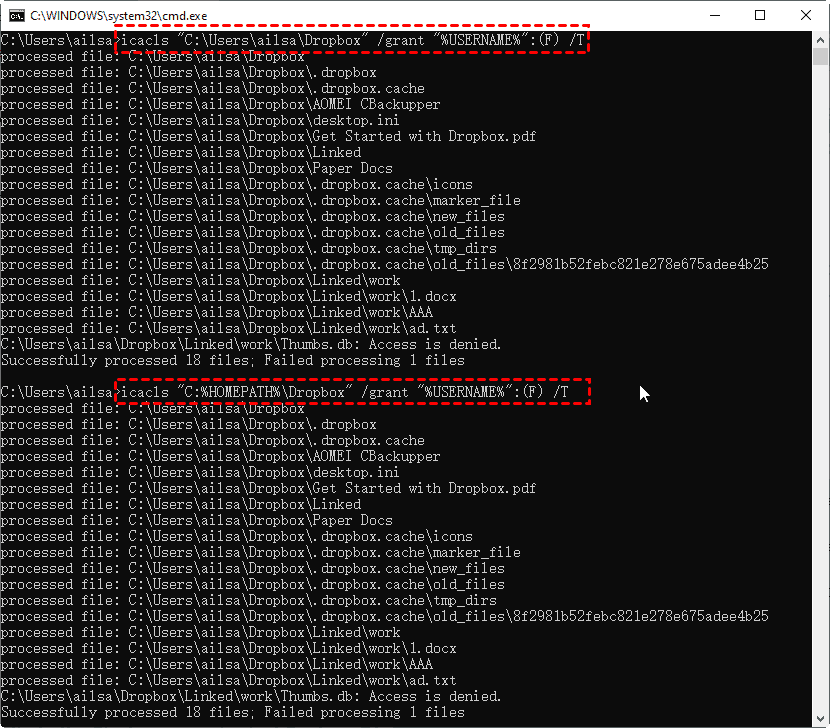 Dropbox will stop working to sync the files that are located in the same location, and the files have the same file name, even the other one appended with the whitespace. And Dropbox will also stop syncing if the folder has a whitespace conflict.

Now you could do these things:

Add Dropbox to the firewall or antivirus software white list, as well as the DropboxUpdate.exe.

Or Reinstall the Dropbox desktop app to upgrade Dropbox to the latest version.

To fix Dropbox has stopped syncing problem, restarting the Dropbox desktop app could fix it, it will restart the Dropbox sync engine and sync your files again.

Generally, restarting your computer could fix most of the problems, and then check if your Dropbox stopped syncing problem is solved.

If you still have problems syncing files with Dropbox. It’s highly recommended to try the free cloud backup service - CBackup to sync files to Dropbox with simple clicks. Its reliable feature and stable performance attract millions of users.

Step 2. Go to the My Storage tab, and then click Dropbox icon to add your Dropbox account.

Step 4. Rename the Task Name, and choose the files you want to sync to Dropbox, open the Dropbox cloud and choose a folder in Dropbox to save the files.

Note: You could also enable email notification to get an email about the sync process especially when you perform an unattended sync task, and the file filter allows you to exclude the file types you don't want to sync.

Now, you can just set it and forget it. Any changes will automatically be synced to Dropbox. And the Dropbox stopped syncing problem will be bypassed easily.

Further Reading: How to Stop Dropbox from Syncing?

1. Click the Dropbox icon on the system tray, and a Dropbox window will pop up.

2. Hover over the text: Your files are up to date, Syncing [filename], or Syncing [x] files. 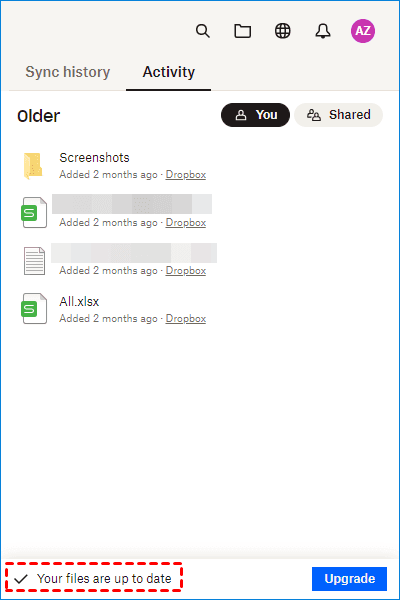 3. And it will be changed to Pause file sync, click it and select 30 minutes, 1 hour, Until tomorrow, or Indefinitely. 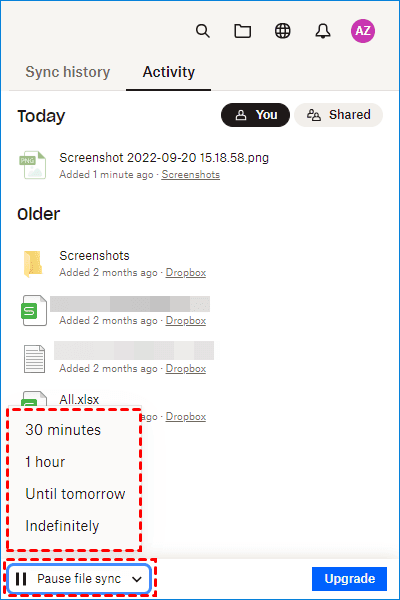 Now, Dropbox has stopped to sync files, and you can wait the time to resync your files to Dropbox or hit the Resume sync to sync files again.

If you encounter Dropbox stopped syncing issues on your computer, please try the 12 solutions to make Dropbox sync again. It’s strongly recommended to try the free cloud backup service - CBackup to sync or backup files to Dropbox if you cannot fix the Dropbox syncing stuck problem.

You May Also Like
Top 10 Ways to Fix "Dropbox not Syncing Windows 10" Problem
8 Solutions to Shared Dropbox Folder Not Syncing
Fixed: Dropbox Is Not Syncing on Android - CBackup
7 Fixes for Dropbox Selective Sync Not Working on Mac and Windows PC
5 Effective Ways to Solve Dropbox not Working Issue on Computer