How to Backup to Dropbox Without Syncing on Computer | 3 Ways

Can I upload to Dropbox without syncing?

“I have a lot of files on my computer and I upload them all to Dropbox. But they sync to my computer again. The problem is that I don't have much free space on my PC. Can I get files backup to Dropbox without syncing? Is it possible?”

Dropbox, a famous file storage service, allows you to upload files to its cloud and share files with others for easy cooperation. But have you found that files uploaded to the Dropbox cloud are also synced to your computer? Numerous synced data may take up a lot of disk storage space, how do I stop Dropbox from syncing to computer? In this guide, we will show you three ways to help stop Dropbox from syncing locally from cloud.

How to Backup to Dropbox without Syncing on Computer

You can backup files to Dropbox, but in fact, Dropbox is not a backup service. It is designed to keep copies of files on your computer in sync with copies online and on other devices. Fortunately, backing up to Dropbox without synchronization is not something that cannot be accomplished. Here are several possible ways.

The Smart Sync feature provided by the Dropbox client allows you to clear up your computer hard drive space occupied by synced cloud files or folders by setting them to "Online-only". You can select some or no folders to sync from the cloud to your computer, as needed. Once set up, these files/folders are neither deleted nor take up hard drive space, but only remain placeholders on the computer.

#1. The Smart Sync feature is only available to Dropbox Plus, Family, Professional, and Business plan users.

#2. As soon as you open the files in the Dropbox folder locally, it will automatically sync to your computer, allowing you to edit the file offline. After that, you'll need to manually set it to "Online-only" again to make room on your hard drive.

2. Right-click the file or folder that you need to stop from syncing and hover over Smart Sync.

3. Select Online Only to backup files to Dropbox without syncing. 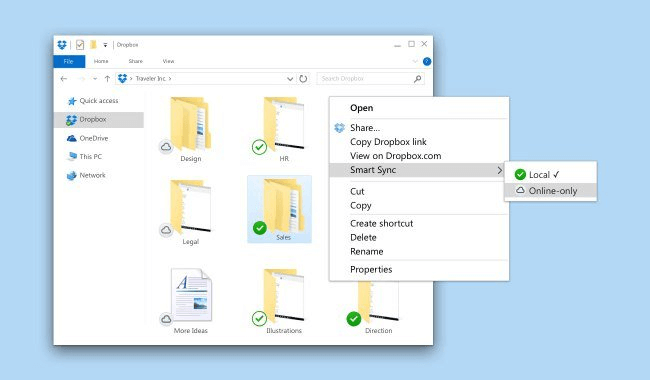 Selective sync is a feature available to all Dropbox app users that lets you remove specific Dropbox folders from your computer's hard drive to save hard drive space. After removal, the corresponding folder will remain in your dropbox.com account, but will not be stored on your computer.

It should be noted that selective sync can only unsync folders (including the files and folders within them). This feature is not available to individual files. The following is how to unsync Dropbox without deleting files.

1. Click on the Dropbox icon on the taskbar, tap Settings, and then Preferences.

2. In the Sync tab, tap on the Selective Sync button.

3. Untick the folders you’d like to remove from your PC and hit the Update position.

CBackup is a free and easy-to-use backup tool that allows you to automatically back up your files to Dropbox on a specific time, daily, weekly, and monthly schedule. By using this software instead of the Dropbox client to backup data, you won't have to worry about the file synchronization taking up space on your computer.

Besides backing up files to Dropbox, this all-in-one backup tool also supports uploading files to Google Drive and OneDrive. Plus, its cloud-to-cloud backup feature enables you to easily transfer files between different cloud storage. For example, you can move Dropbox files to Google Drive with simple clicks. Click the download button below and follow the steps to see how to stop Dropbox from syncing desktop using this utility.

4. Specify Task Name, and choose folders/files you want to upload to Dropbox. Select the added Dropbox account as the backup destination. 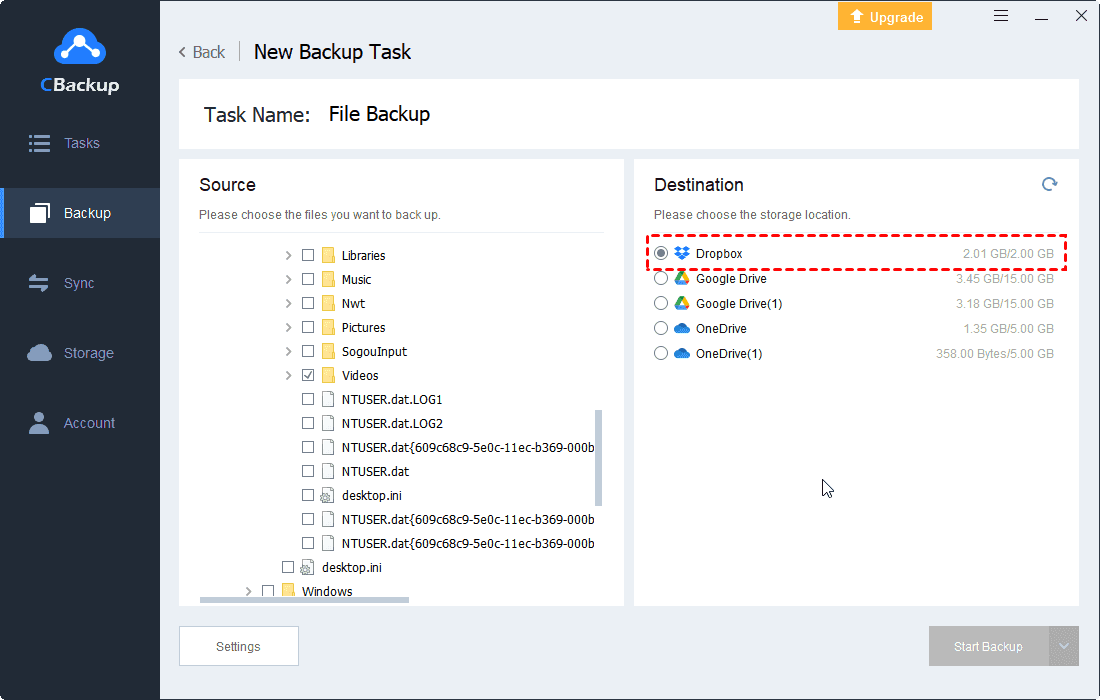 5. Press the Start Backup button to backup data to Dropbox without syncing to computer.

We mentioned above that Dropbox is not a file backup service, but a file synchronization service. If file backup is your only purpose, saving your files to CBackup Cloud is a better choice.

CBackup Cloud is a secure data backup space offered by CBackup with 10GB of free space and expandable cost-effective backup space. With it, you can perform PC auto backup on a customized plan. You can also use its file filter feature to exclude or include certain files for backup in a huge folder. It even allows you to set up email notifications for backup tasks. 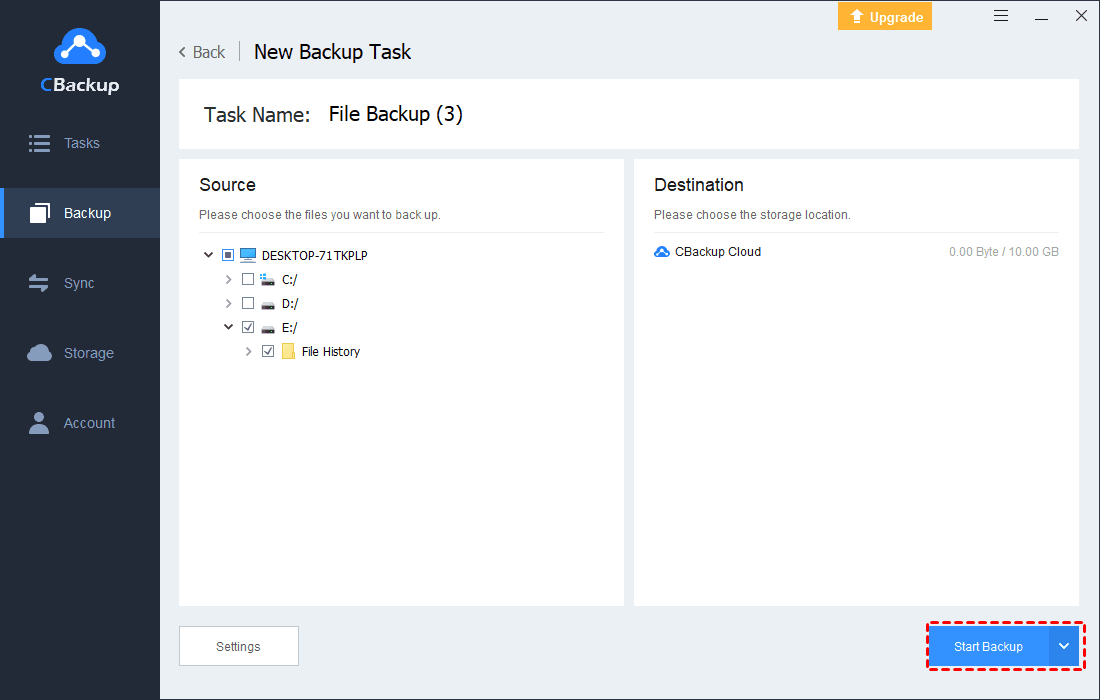 We believe you are so clear about how to backup to Dropbox without syncing now. Our option is to use CBackup for this task. Because it's completely free and works once and for all, you don't have to worry about files being synced to your computer again just because you open them. In addition, we provide another file backup solution that can help you securely back up computer files without synchronization.

Hope you can get help in this post to complete the task of how to use Dropbox as a backup without syncing.

You May Also Like
How to Use OneDrive for Backup Only for Files | Two Ways
Let Dropbox Stop Syncing Folder with 6 Free Ways
Dropbox Keeps Syncing Without Stopping! What Should You Do?
5 Fixes to Video is Still Processing on Google Drive & Google Photos
6 Ways to Solve OneDrive isn’t Connected and Sign in