9 Ways to Sync Computer to Dropbox or Vice Versa

Looking for the best way to sync computer to Dropbox or vice versa? Scroll down to the 9 ways to perform Dropbox computer backup and 1 tip to deal with Dropbox full error.

How to sync computer files to Dropbox not Dropbox to computer?

How to sync computer to Dropbox easily?

Dropbox desktop app is quite easy for all of us to sync files to Dropbox and manage Dropbox files. However, some users like above might don’t know how to sync files to or from Dropbox, here we will walk you through all the solutions to sync computer to Dropbox or Sync Dropbox to computer. Let’s find out.

Part 1. How to Sync Computer to Dropbox Easily?

If you want to sync files from computer to Dropbox easily, here are some solutions for you.

3. If you want to sync all computer files to Dropbox, you have to repeat the above steps, but, it’s quite time-consuming.

Way 2. Move Folders to Dropbox Folder in your Computer

Please ensure you have installed the Dropbox desktop app first before the following steps.

Or you could try the solutions to make Dropbox sync folders outside of Dropbox folder.

2. Click All Files on the left, then press the Upload button, then select Files or Folders to sync computer to Dropbox.

1. Please go to Dropbox Preferences: click the Dropbox icon on the system tray or Finder, tap your Dropbox avatar, and select Preferences.

2. Click the Backups tab, and tap Set up under This PC section. 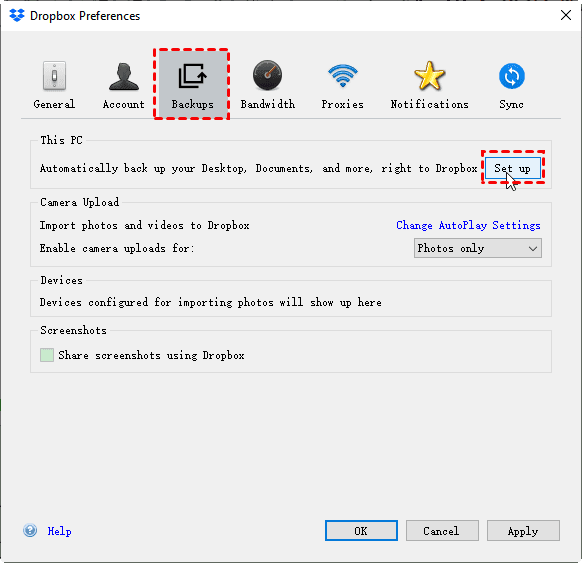 3. Select the folders you want to backup to Dropbox automatically, and click Set up. 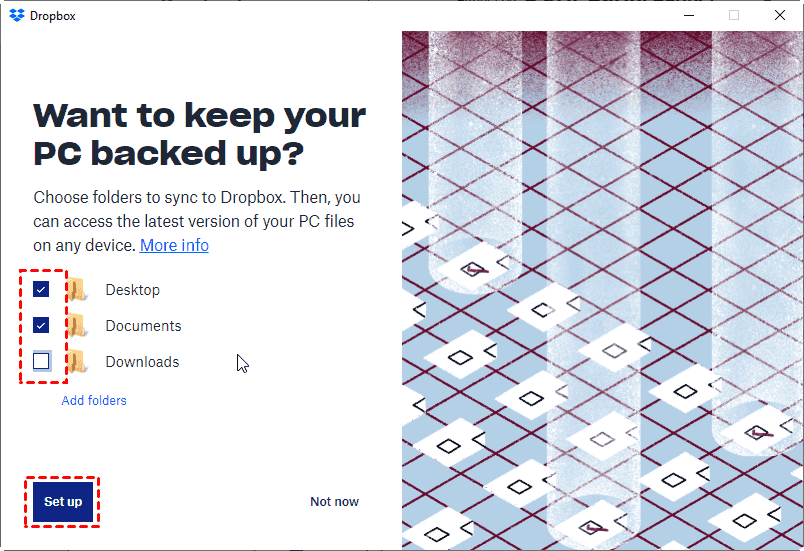 It will start syncing your files and folders to Dropbox.

This way only works for Desktop, Documents, Downloads, Music, Pictures and Videos folder on your computer.

If you sync the folder outside the Dropbox folder, you could do the following steps:

1. Select the folder and right-click it, and choose Move to Dropbox. 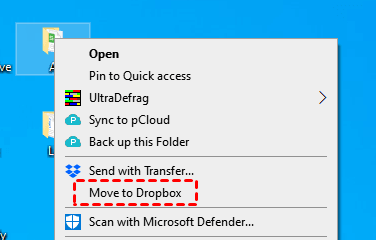 2. It will automatically be moved to the Dropbox folder and synced with the Dropbox cloud.

If you do not want to sync the folder anymore, just remove it from the Dropbox folder and to another location, it will be removed from Dropbox everywhere, and only keep it on your computer.

Step 3. Modify the settings for Dropbox account on CBackup. Edit the Cloud name and Storage path, and tick the option “Note: Please don't modify or delete the CBackup Path or backup files in your Dropbox account.”, and hit OK.

Step 4. Then your Dropbox has been added to CBackup. Please select Sync > Sync PC to Public Cloud to sync computer to Dropbox.

Step 5. Modify the Task Name and select the entire computer to sync. Then choose a Dropbox folder as the destination.

★Tips: You could enjoy the following features in Settings on the bottom left:
Scheduler: Dropbox will automatically sync files to Dropbox at a specific time, daily, weekly, or monthly.
Email Notification will send you the email alert once the sync is finished successfully or failed, it’s very useful when you are not around the computer.
File Filter enables you to include or exclude the file types you want or don’t want to sync. 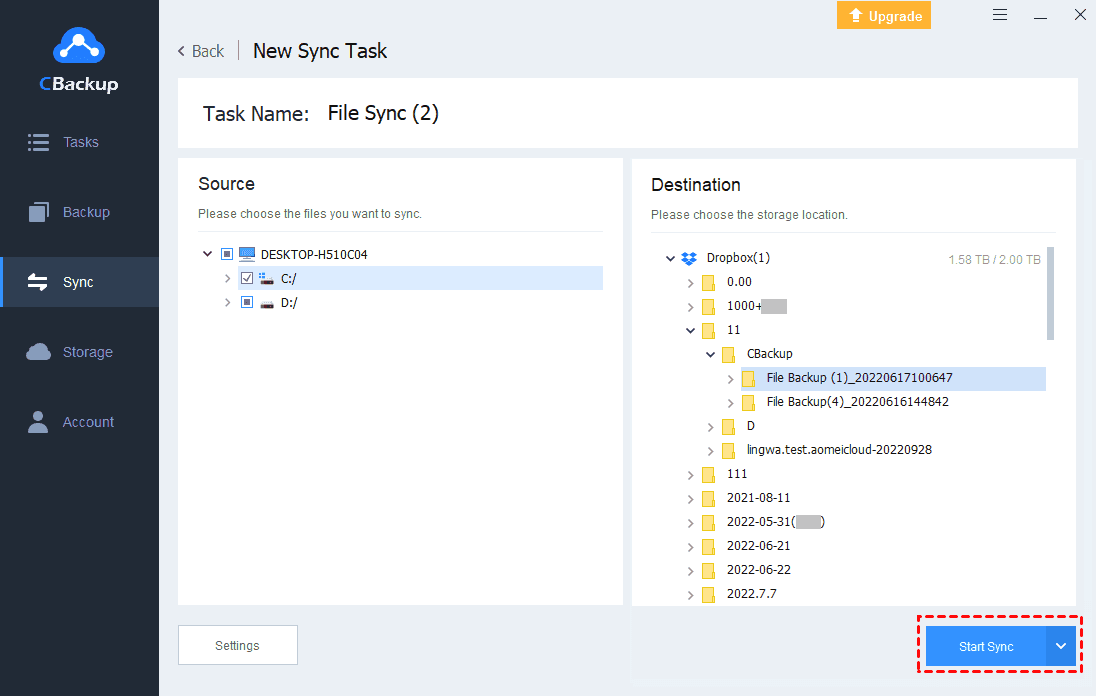 Part 2. How to Sync Dropbox to Computer?

If you are a Dropbox Basic or Business user:

1. Please click the Dropbox icon on the system tray or Finder, tap your Dropbox avatar, and select Preferences. 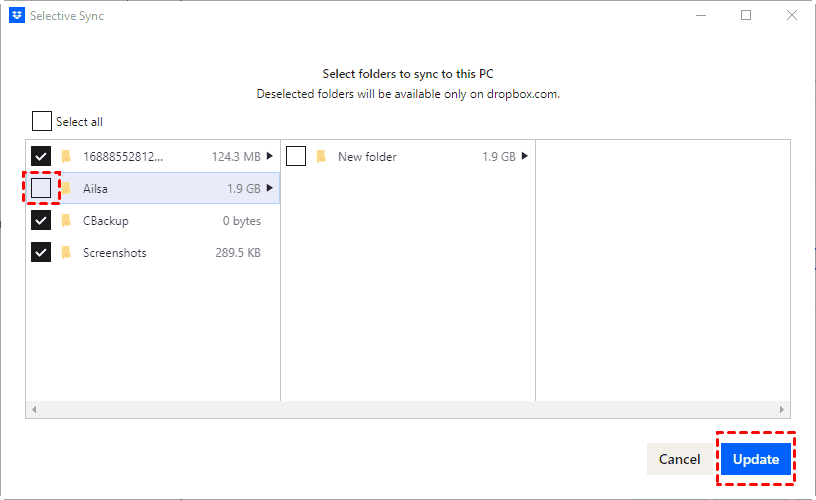 3. Select the folders you want to backup to Dropbox automatically, and click Set up.

4. Tick Select All to choose all Dropbox folders, and click Update to sync the entire Dropbox to computer. 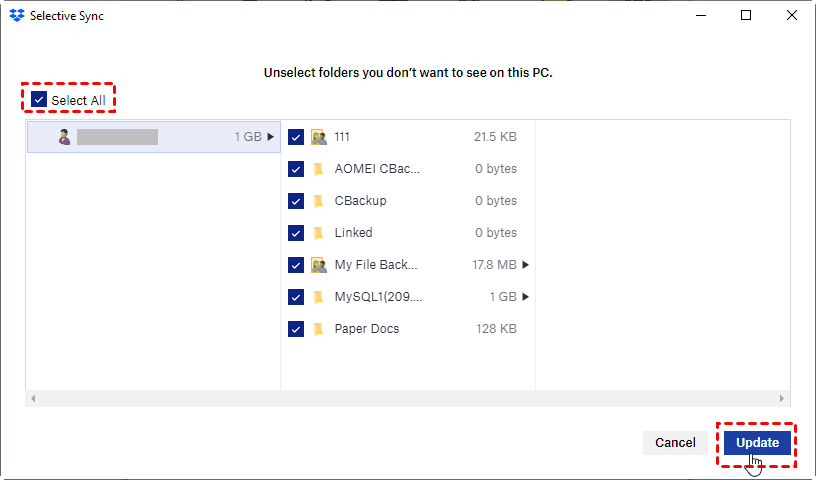 If you are a Dropbox Business user (Dropbox Plus, Family, Professional, or Business), Dropbox Smart Sync will do you a big favor.

Sync a Dropbox file or folder to computer:

1. Go to File Explorer (Windows) or Finder (Mac) and open the Dropbox folder.

2. Right-click the file or folder you’d like to sync to Computer.

What If Dropbox Runs Out of Cloud Space?

If you choose to sync computer to Dropbox, and the 2 GB of free cloud storage will be filled quickly, and you don’t want to upgrade to Dropbox Plus, Family, or Business Account right now. CBackup provides an easy feasible way, that is merge multiple Dropbox accounts into one and generate a huge Dropbox combined cloud, then backup files to it.

1. Add other Dropbox accounts to CBackup by clicking the My Storage icon > + Add Cloud.

3. Tick all Dropbox even other cloud drive accounts you added before, and hit Next > Combine.

Now you have got a large Dropbox combined cloud, then backup files to it according to the below steps: 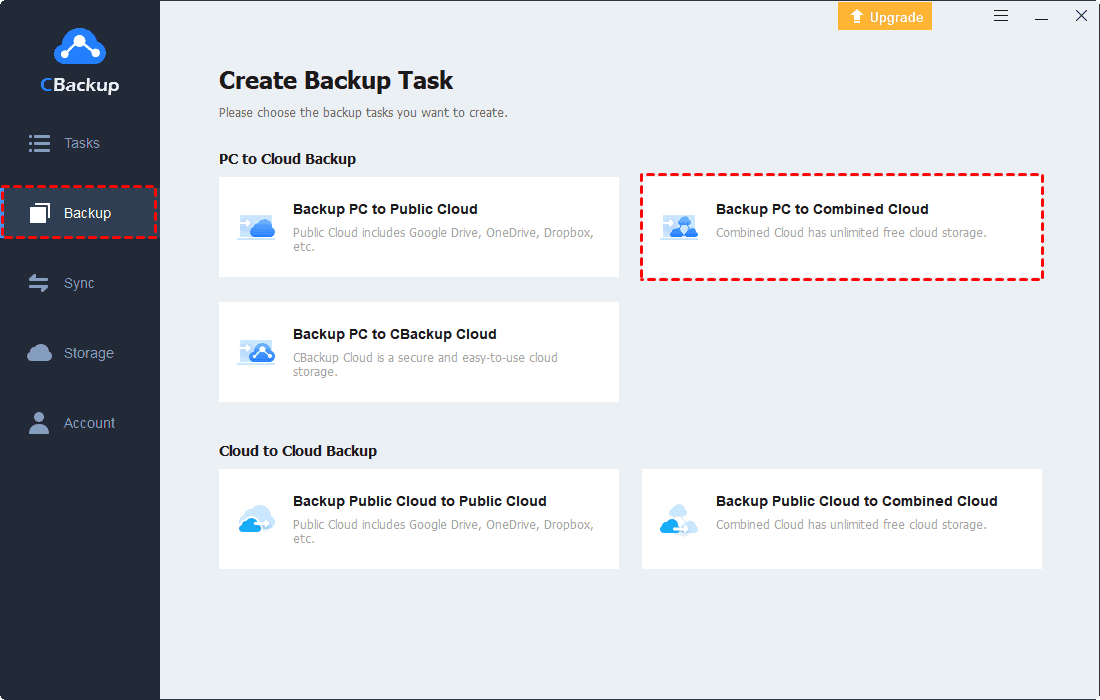 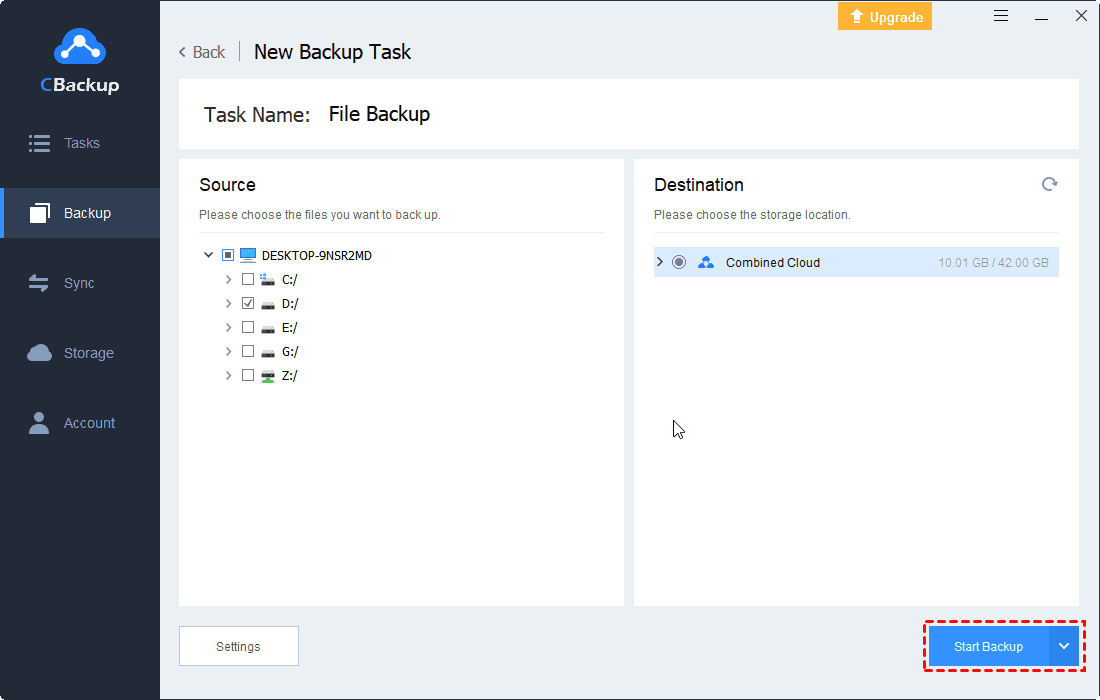 Besides, you could perform cloud to cloud backup and cloud to cloud sync if you want to change Dropbox school account to a work or business account without losing everything.

You May Also Like
How to Backup External Hard Drive to Dropbox? [3 Ways Included]
Solved: Dropbox Sync Only Certain Folders | 4 Easy Ways
How Do I Force Dropbox to Sync Folder | 7 Solutions + 1 Tip
How to Backup Files to Dropbox Automatically | 3 Ways
2 Solutions to Perform Dropbox Schedule Sync in Windows