Learn how to sync local folder to Dropbox automatically and easily in 2 different ways in this article. Some addition tips that you may need will also be introduced here.

Most users should be very familiar with Dropbox because it is one of the oldest and most popular cloud services around the world. It seamlessly fits Windows, macOS, Android, and iOS, allowing you to be backup files to Dropbox and synchronized across multiple computers. Meanwhile, it offers each user 2 GB storage space and has several rate plans that you can choose from, even the free plan will allow you to carry out synchronization processes.

“There are some folders on my computer that I want to sync to cloud so that I can keep a copy of my local data in the cloud. I plan to use Dropbox, however, I don't know how to achieve that. Is there a method to automatically sync folders to Dropbox?”

Of course you can sync local folder to Dropbox. Dropbox offers different upload and sync apps for different devices that you can use to sync your files or folders. If you are a PC user, the PC client of Dropbox can help you. When you install the Dropbox application on your computer, it creates a special folder for file syncing. All files or folder that you put into this folder will be sent to the cloud server of Dropbox automatically.

How do I automatically sync local folder to Dropbox?

Way 1. Use Dropbox folder to sync local folder with Dropbox

As mentioned above, Dropbox offers a desktop app to help users sync local folder with Dropbox. Therefore, you can download this tool from the Dropbox website and set up it to sync your folders automatically with the following steps:

2. Download and install the desktop application. The installer will automatically generate a folder called "Dropbox" on your computer.

3. To sync local folder with Dropbox cloud, you must put the folders into the Dropbox folder. 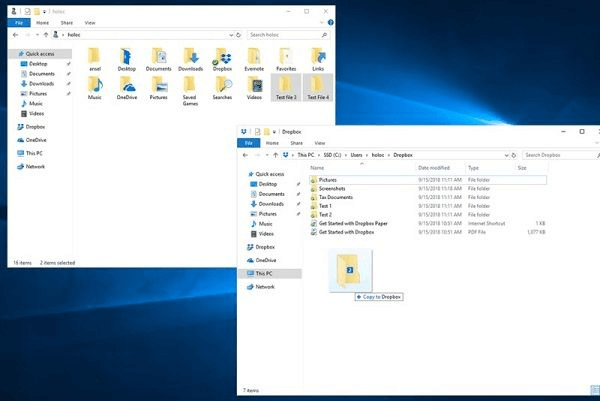 ✎Note: It is recommended to cut and paste the folders instead of copying them as this will save space on your computer and avoid making mistakes when editing files.

Way 2. An Automatic Way to Sync Local Folder with Dropbox

Besides the official desktop app that provided by Dropbox, you can also rely on the free cloud backup service - CBackup, which allows you to automatically sync local folders to Dropbox. It supports mainstream clouds, like Dropbox, OneDrive, Google Drive, etc. Besides, there is no file size limitation while syncing or backing up.

2. Click the My Storage icon on the left side, then press Add Clouds button, choose Dropbox and hit Add. Then complete the authority to CBackup.

4. Select the local folders in the Source tab, and choose a Dropbox folder as the sync destination. Hit Settings > Scheduler and then choose an interval to sync files to Dropbox.

Tips: You can click Settings to use the File Filter feature and Email Notification feature. The former can help you filter unwanted files, and the latter can set reminders of sync results.

However, there are chances that you might meet the Dropbox is not syncing problem due to the limited Dropbox free space, 2GB, and what if you want to store more files on Dropbox and don't want to upgrade Dropbox account right now, here comes the CBackup, which allows you to increase Dropbox cloud storage space by combining two or more Dropbox accounts, even different clouds.

1. Please add enough Dropbox accounts or other clouds to CBackup according to the above step under My Storage.

2. Click + Add Combined Cloud in the My Storage tab.

3. Tick all Dropbox accounts or other clouds, and press Next, then choose backup order for these clouds, then hit Combine.

Besides, you could enjoy the following useful functions while protecting your data:

The contents above have shown how to sync folder to Dropbox with ease and you can follow the detailed steps. If you meet any problem when using Dropbox to sync your local folder, you can use a Dropbox alternative like CBackup to protect your PC files in an easier way. If you need more Dropbox cloud storage for free, just try CBackup to make it true.

You May Also Like
How to Set Up QNAP NAS and Dropbox Sync for Data Protection?
Top 2 Ways to Sync Dropbox and Google Drive the Same Folder
Fixed: Dropbox Is Not Syncing on Android
Ultimate Guide: How to Backup Computer to Dropbox? (3 Ways)