How to Migrate OneDrive to Dropbox Effortlessly [Full Guide]

This post covers 3 ways to migrate from OneDrive to Dropbox. If you are searching for solutions to transfer OneDrive files to Dropbox, this post will work you out. Keep reading to get more useful information.

OneDrive and Dropbox are the two most trusted and secure cloud storage providers today. Many people use OneDrive for work files and employ Dropbox to store personal data. What if you need to store all files in one cloud? How to migrate OneDrive to Dropbox or vice versa?

OneDrive, formerly known as SkyDrive, is a cloud storage provider launched by Microsoft. It allows users to upload files to OneDrive via their mobile phones, computers, or browsers, and users can access these files anytime, anywhere. Free users of OneDrive have 5GB of storage space. OneDrive integrates with Microsoft Office and comes pre-installed with Windows 10 and 11.

Dropbox, founded in 2007, is an online storage service. Users can store and share files and folders. Users can sync files to the cloud through the Dropbox client, or upload files manually through a web browser. It offers 2GB of free space for each user. Its Camera Upload feature performs automatic upload of photos to the cloud.

If you want to migrate OneDrive files to Dropbox, you can fulfill it in the following 3 ways. 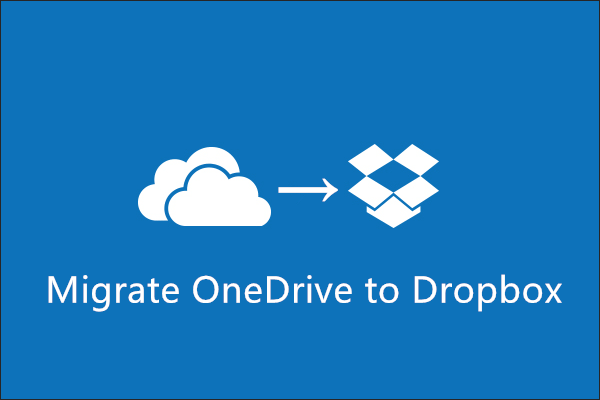 There are plenty of third-party tools that can help you move files from OneDrive to Dropbox on the market. To save your time and money, we highly recommend using CBackup.

CBackup is a professional yet easy-to-use cloud backup tool. Its cloud to cloud transfer feature allows users to automatically sync OneDrive to Dropbox or migrate Dropbox to OneDrive in one click. Users can manage auto-transfer if needed. It supports filtering useless documents when transferring files between cloud drives as well.

How to move photos from OneDrive to Dropbox with CBackup? Let’s get down to business.

✎Note: The desktop application of CBackup supports OneDrive to Dropbox migration as well. You can download it to achieve that if you like.

2. Go to the My Storage section, click + Add Cloud to select OneDrive, and continue to complete the authorization to allow CBackup to access your OneDrive files. Click + icon next to My Storage, select Add Cloud, and repeat the step to add Dropbox to CBackup.

4. In the Source section, rename the task name, and tap on Add Source to select OneDrive as the backup source. You can also select to migrate files from OneDrive to Dropbox instead of a whole cloud drive with CBackup.

If you want to perform Dropbox auto backups of OneDrive, you can press the Settings button to enable scheduled backups easily.

You can get OneDrive files migrated to Dropbox in manual ways. We offer you two different ways here.

1. The download speed and upload speed of files are limited by the speed of your network. It may take a long time to download and upload a large number of documents. The same is true for copying and pasting files between folders.

2. Dropbox limits the maximum file size for uploading to the Dropbox website to 50 GB.

3. Zip files can be uploaded to the Dropbox website.

You can migrate OneDrive data to Dropbox by downloading files from the OneDrive site, and then, uploading them to Dropbox from its website. You can follow the steps to do it. How to transfer from OneDrive to Dropbox with their websites? Below are the detailed steps.

Way 2. Transfer from OneDrive to Dropbox via the Desktop Folders

Dropbox and OneDrive both form desktop folders on your computer, the Dropbox folder and the OneDrive folder, after you download and launch them on your laptop. You can migrate OneDrive files to Dropbox through desktop folders.

In the OneDrive folder on your computer, locate and copy the files you want to get migrated. Next, head to the Dropbox folder, and paste the files to it. In this way, you can get data migration as well.

What should you do if you have stored too many files in Dropbox, resulting in insufficient space in Dropbox? Don't panic, in addition to upgrading Dropbox storage packages, you can rely on CBackup to merge two or more Dropbox accounts to increase Dropbox storage free of cost.

CBackup supports combining unlimited accounts of popular cloud storage services such as Dropbox, Google Drive, OneDrive, and so forth. As long as you have enough accounts, you can gain 1TB free cloud storage effortlessly.

1. Open the CBackup desktop app. In the My Storage tab, add all your Dropbox accounts to CBackup like above.

2. Click on the + Add Combined Cloud on the top. 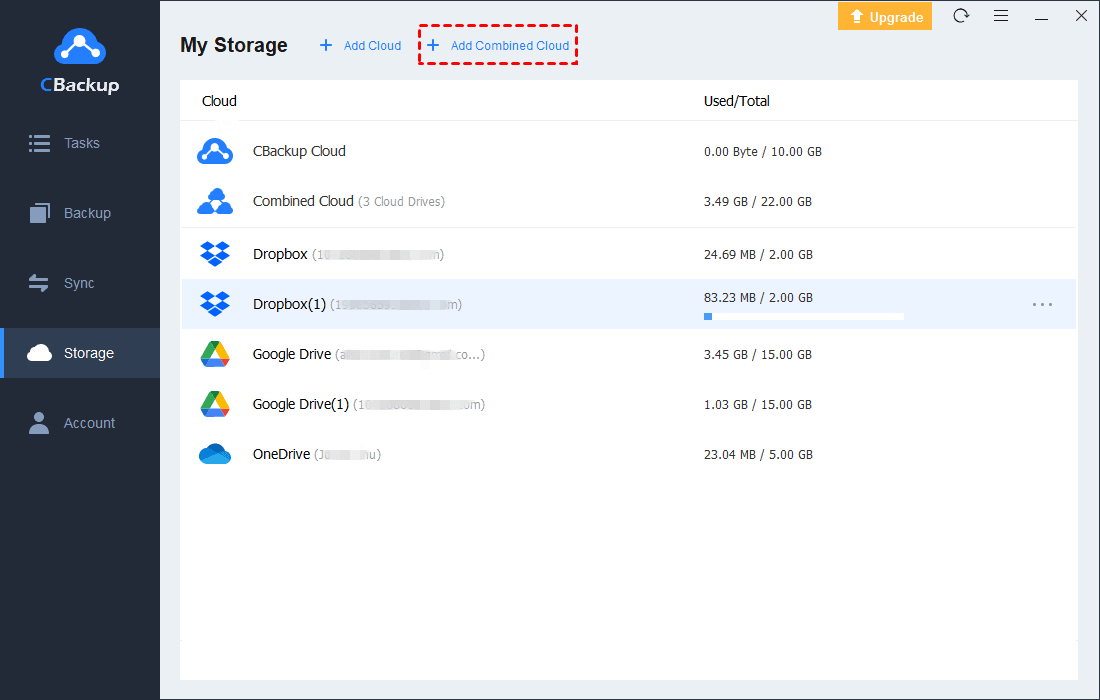 3. Select all Dropbox accounts you have added. You can also click the Add Clouds button to add more accounts. Then, click Next, and then Combine. 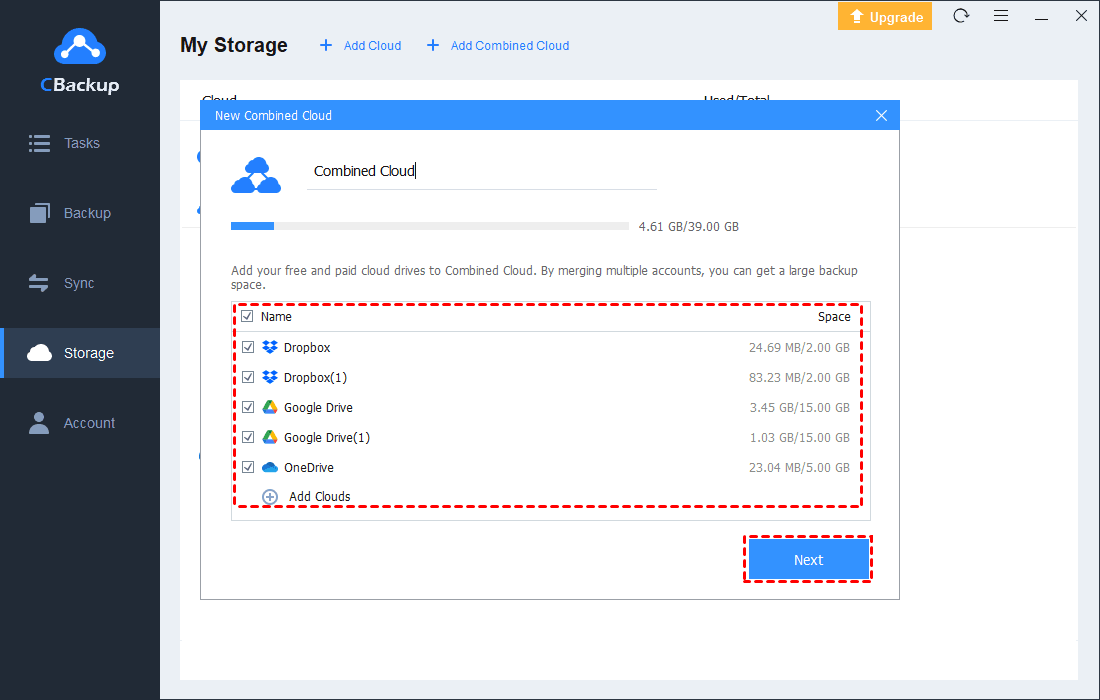 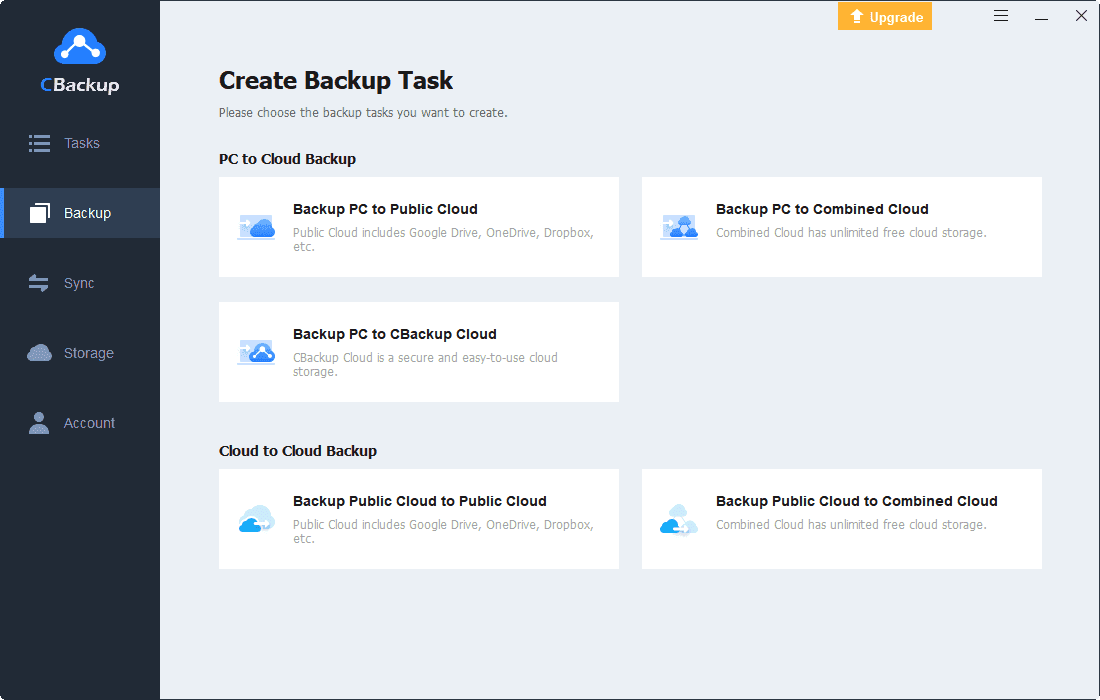 There are multiple ways to migrate OneDrive to Dropbox. But tools like CBackup can help you make data migration much faster and easier. It enables you to backup OneDrive to Dropbox automatically. And it offers to combine multiple Dropbox accounts to increase Dropbox backup space for free. Don't hesitate to download and try it!