“I just did a fresh OS install on my Mac, with my Dropbox folder on an external drive. The next day, I see a big mess of duplicate and triplicate folders. To make matters worse, the folder sizes are different, and there are multiple Dropbox selective sync conflict folders. Is there any way to solve it and manage these folders?”

Dropbox is a cloud storage service with a wide audience. When you save a file to the Dropbox folder on your computer, it will automatically sync the file to the cloud, and you can access the file through apps on a variety of devices. Dropbox has a "selective sync" feature, you can select only the folders you want to sync to your computer.

What does selective sync conflict mean in Dropbox? When you choose not to sync the folder to your computer in the "Selective Sync" preferences, a folder with the same name as the unsynced folder is created, and they are in the same location, a selective sync conflict in Dropbox will occur. And if you try to sync two folders, the newer folder will have the words "Selective Sync Conflict" appended.

How to resolve selective sync conflict in Dropbox?

Option 2. Change the name of the conflict folder

This method is suitable for accounts where there are not many files in the conflict folder: you can manually check the required files in the two folders, and transfer them to a new folder created in the Dropbox folder by dragging or copying and pasting them. And the new folder will be synced to the Dropbox cloud. After completing this operation, you can delete the two conflicting folders to free up storage space.

How to prevent a sync conflict from happening again?

Whether to avoid sync or selective sync conflicts, you need to do the following:

1. Please check your Dropbox account online to make sure the folder to be created is not in the same location.

2. If you share files with others, you’d better control your partner's operating permissions. If your partner only needs to read files, please set his permission to "read-only".

3. If your partner needs to work with you to operate the sync folder, you can tell each user to put the files they created under a subfolder named after the individual.

4. Avoid manually copying unsynced files to other computers, which may easily cause conflicts, especially Office files.

Sync everything from Dropbox to another cloud drive

If you resolved the issue, you could continue syncing files with Dropbox, or try another cloud storage service to avoid Dropbox selective sync conflict mess. Common and useful cloud drives include Google Drive, OneDrive, iCloud, Box, etc. They can also help you sync data and share folders with others.

What if you want to sync the Dropbox files to another cloud drive account with everything transferred, and bypass the Dropbox selective sync conflicts forever? Just try the free cloud backup service CBackup to get things done.

CBackup is a professional and secure cloud backup service, which supports Google Drive, Dropbox, OneDrive, etc. It supports automatic sync of files from one cloud account to another cloud account and provides flexible sync settings. In this way, with only one login you can manage multiple cloud storage accounts.

Follow the steps listed below to sync files from Dropbox to another cloud like Google Drive for example with CBackup:

Step 2. Click the My Storage > Add Clouds, and Select Dropbox and click Add. then follow the on-screen guide to grant access to CBackup to manage Dropbox files. Then edit the settings for Dropbox. And then use the same method to add your other cloud drives (Google Drive is a demonstration here). 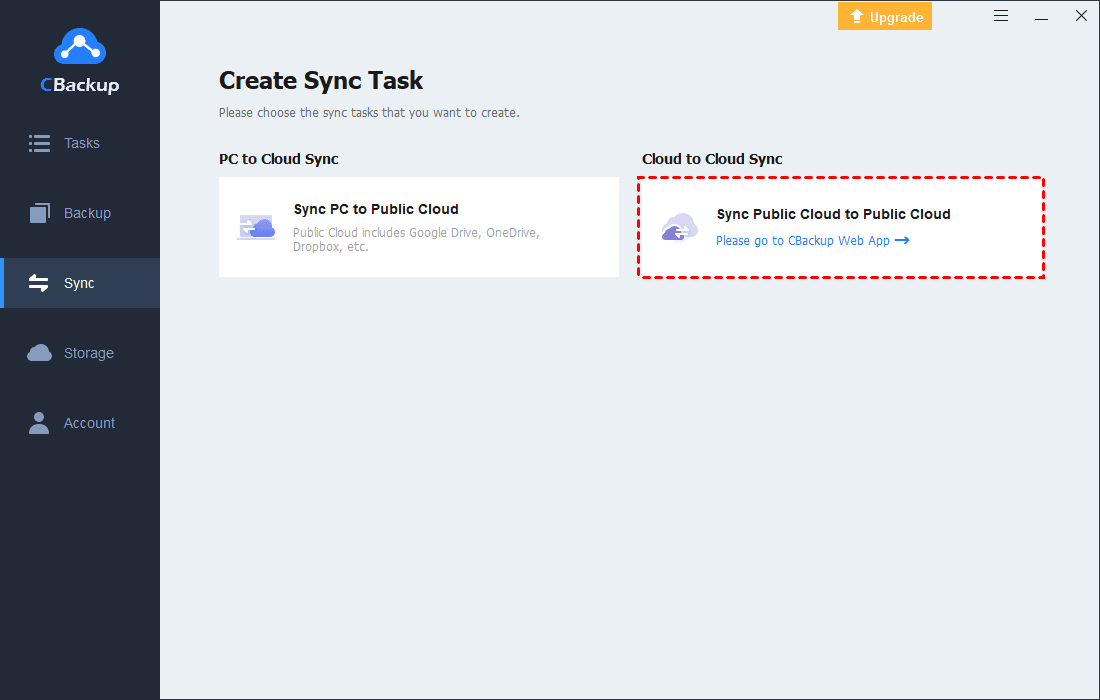 Step 4. Hit New Task on CBackup web app, and then click Add Source to select Dropbox as the sync source, and hit Add Destination to choose Google Drive as the destination.

Tip: You could set up the Settings on the bottom left of the window, then set Scheduler to run the sync at a specific time, daily, weekly, even monthly; email notification can send you the email about the sync process; file filter can only include the file types you want to sync, and more.

If you cannot solve the Dropbox selective sync conflict error and want to sync the data in the Dropbox conflict folder to Dropbox, there is a very simple method - use the free cloud backup service CBackup to sync files to Dropbox easily.

Note: Please ensure you have uninstalled the Dropbox desktop app on your computer.

Then do the following steps to sync files to Dropbox easily and automatically, and ensure you have added Dropbox to CBackup:

2. Then choose the local files and folders you want to sync, and select a Dropbox folder as the destination.

3. Click the Settings on the bottom left, then click Scheduler > Set a Sync schedule for automated Sync, choose One time only, Daily, Weekly, or Monthly, and hit OK.

Besides, you could enjoy other useful features like:
Backup files to Dropbox, Google Drive, OneDrive, CBackup Cloud, the combined cloud, etc.
Combine multiple Dropbox accounts with CBackup to get more free storage space if your Dropbox is full.
Backup one cloud to another easily with powerful settings, like scheduler to allows you to perform Dropbox schedule backup, email notification, file filter, etc.
10GB free cloud storage space of CBackup Cloud, and you could upgrade to 5TB at a lower price.

The methods to resolve the Dropbox selective sync conflict are introduced in the article and tell you how to correctly avoid this situation from happening again. But if you cannot completely solve this problem manually, or worry that Dropbox not working in the future, you can switch to other cloud storage services and use CBackup to back up the data in Dropbox to another cloud drive to avoid loss.