Best Way of Using Dropbox and OneDrive Together Effectively

Being anxious about using Dropbox and OneDrive together? This article will offer the best way to sync OneDrive with Dropbox easily and display 2 more solutions. Please read on.

Recently, numerous people are worried about “how can I use Dropbox and OneDrive at the same time?”. And using Dropbox and OneDrive together has become a common demand since more and more people started to try cloud-to-cloud sync to avoid online data loss and get more cloud storage. 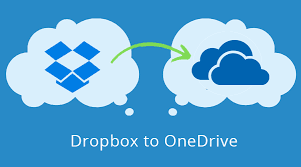 Causes of using Dropbox and OneDrive together

As two of the most well-known cloud storage for many years, Dropbox and OneDrive are becoming much more vital for multiple users. Both of them have benefits on online storage. Dropbox is a powerful cloud storage which can access your files anywhere since it supports all popular multiple platforms, PC, Mac, Android, iPad, etc. Surely OneDrive also provides such convenience, but it provides more storage at a lower cost.

Best way to organize Dropbox and OneDrive together

CBackup is a professional cloud service that supports for managing multiple cloud drives together easily in merely one platform. With CBackup, you are allowed to use Dropbox and OneDrive as data transfer destination at the same time, and there’s no need of logging into different accounts from several platforms. Also, since it supports multiple third-party clouds besides CBackup Cloud in one platform, you can enjoy cloud-to-cloud sync & backup among diverse clouds, like OneDrive, Google Drive, and Dropbox.

Hence, you are able to migrate files between Dropbox and OneDrive for business with simple operations in just one service: CBackup. In addition, you can combine your multiple accounts together to a get larger cloud and enjoy unlimited cloud storage. Fortunately, all these sync features are free of charge, so you don’t have to worry about the cost at all.

Besides cloud to cloud sync, there are other useful functions of CBackup as follows:

☛It also supports cloud to cloud backup and can keep unlimited backup versions for you.

☛It offers scheduled backup to set up PC auto-backup tasks at a fixed frequency, like daily, weekly, monthly or one time only.

☛You are able to get unlimited free cloud storage space with combined cloud.

☛High security and super stability with tech support and policy guarantee on security.

☛You can enjoy multiple services based on cloud backup without files format limitations, like file filter and email notification.

How to manage OneDrive and Dropbox in a whole via CBackup

Since it is so valuable and convenient to use CBackup for applying Dropbox and OneDrive together in one app, let’s try it now. Here’s how to sync Dropbox with OneDrive simply with CBackup Web APP:

Step 2. Select My Storage in the left menu bar and click “+” to add your Dropbox and OneDrive accounts to CBackup storage. To finish this, you have to complete the authorization.

✎Note: The authorization system of CBackup is based on OAuth, which is a standard authorization framework that enables CBackup to access multiple third-party applications without the username and password required.

✎Note: You can choose certain files of folders on Dropbox or the entire Dropbox as the backup source.

Step 5. Click Start Sync to carry out your sync task.

✎Note: You can click the arrow next to the Start Sync button to select the delay time, namely delay 1 hour, 2hours, 4 hours, and so on. 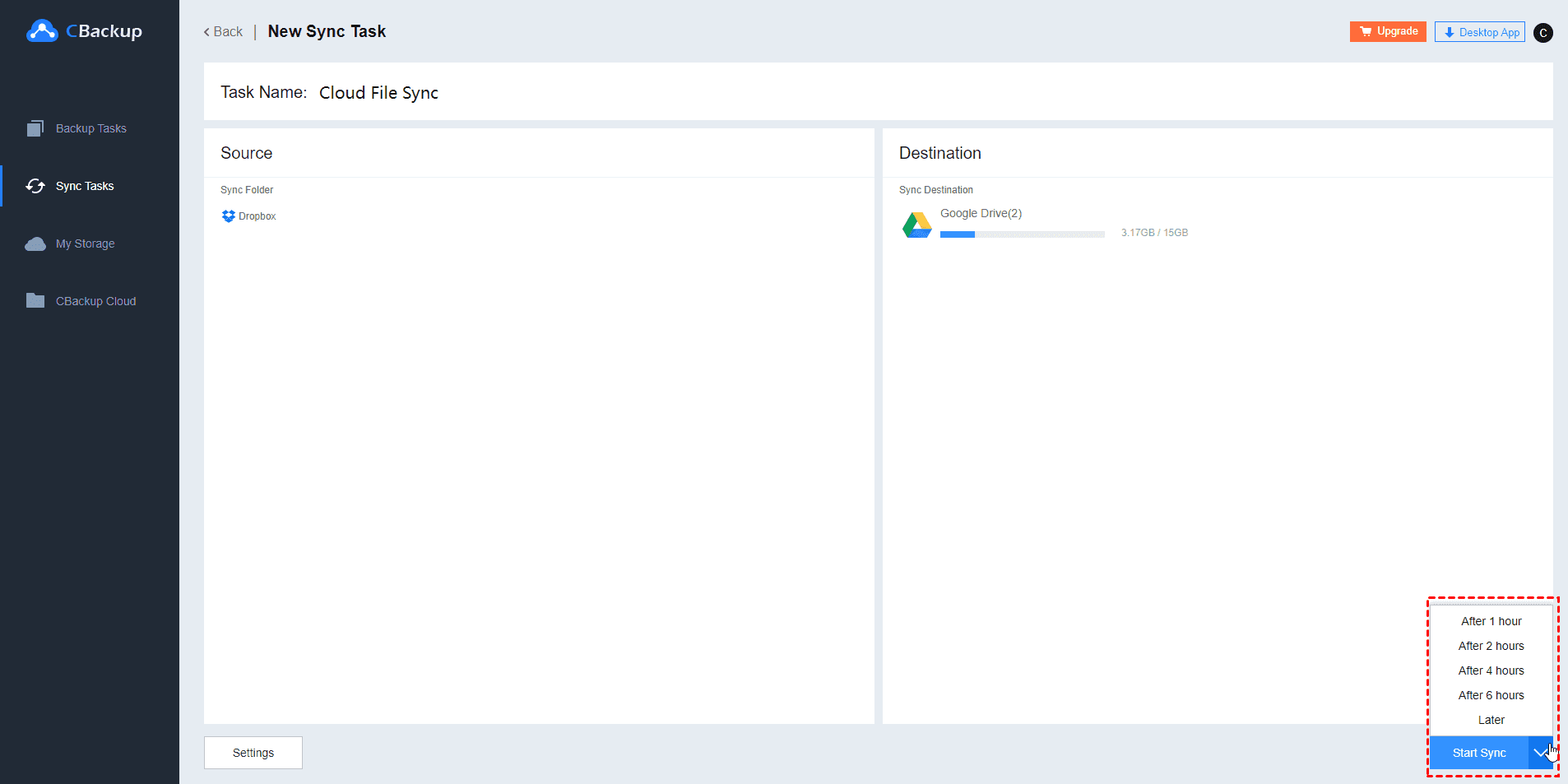 You can also click the Settings in the lower-left corner to enjoy scheduled backup, email notification, file filter, and other useful sync features.

✿Tips: besides the cloud to cloud sync and backup feature in the CBackup Web APP, CBackup also supports PC cloud backup for Windows users. It allows you to back up your files from a local computer to its secure and stable cloud server: CBackup Cloud. Similarly, you can move your files to the third-party cloud drives as well.

Please download CBackup through the secure button below if necessary.

Bonus Tips: other solutions to sync OneDrive with Dropbox

Here are some bonus tips for you, and you can try the other 2 solutions below to sync OneDrive to Dropbox and manage OneDrive and Dropbox files at the same time.

1. Sync Dropbox to OneDrive by downloading and uploading

How to sync OneDrive with Dropbox? In addition to the extremely simple cloud-to-cloud sync method mentioned above, you can also choose the more common backup method: downloading and uploading.

Step 1. Open your browser, say Google Chrome, and log in to your Dropbox and OneDrive accounts respectively.

✿Tip: The files downloaded from Dropbox are in compressed format, so you need to decompress the files before uploading them to OneDrive.

Step 3. On the OneDrive page, click "Upload", select files or folders that have just been downloaded to the local, and then it will perform the upload process to complete the entire sync task.

Step 1. Download Dropbox and OneDrive desktop applications, and then install them on your computer.

✎Note: If the computer is a Windows 10 system, you can directly use the built-in OneDrive in the system.
Step 2. After installation and setup, Dropbox and OneDrive will generate a sync folder in your Windows File Explorer automatically. In this way, you can migrate Dropbox to OneDrive by dragging and dropping Dropbox files or folders to OneDrive. 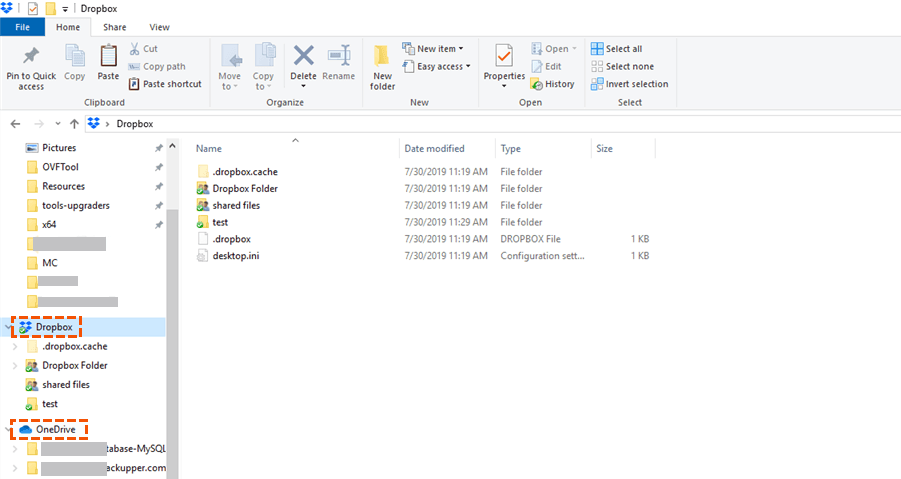 ✎Note: You can also use the copy & cut way to move files. However, if there is an unknown conflict in the progress, the whole process will slow down.

All the three methods mentioned above can sync between Dropbox and OneDrive, but when users need to migrate a large number of files or folders from one cloud to another, CBackup is more convenient and time-consuming than the latter two.

From the content above, it can be seen that CBackup is surely a fantastic way of using Dropbox and OneDrive together. Not only because you can sync files from Dropbox to OneDrive for free, but also you are allowed to enjoy multiple functions at the same time with easy steps. Also, there are 2 other common solutions for you, though they may be a little more complicated.