Full Guide: How to Automatically Save Screenshots to Dropbox

How do I save a screenshot to Dropbox?

I want to set my Dropbox to upload my print screens. Is there a way to save screenshots to Dropbox directly? Any idea on how to do this?

Thankfully, Dropbox screenshot provides you with a simple way to save print screen to Dropbox. In the following, we'll show you how to do it.

How to save screenshots to Dropbox automatically on Windows and Mac

Next, follow the guide below to learn how to automatically save screenshots in Dropbox on Windows and Mac.

Step 1. Run and log in to the Dropbox desktop app. 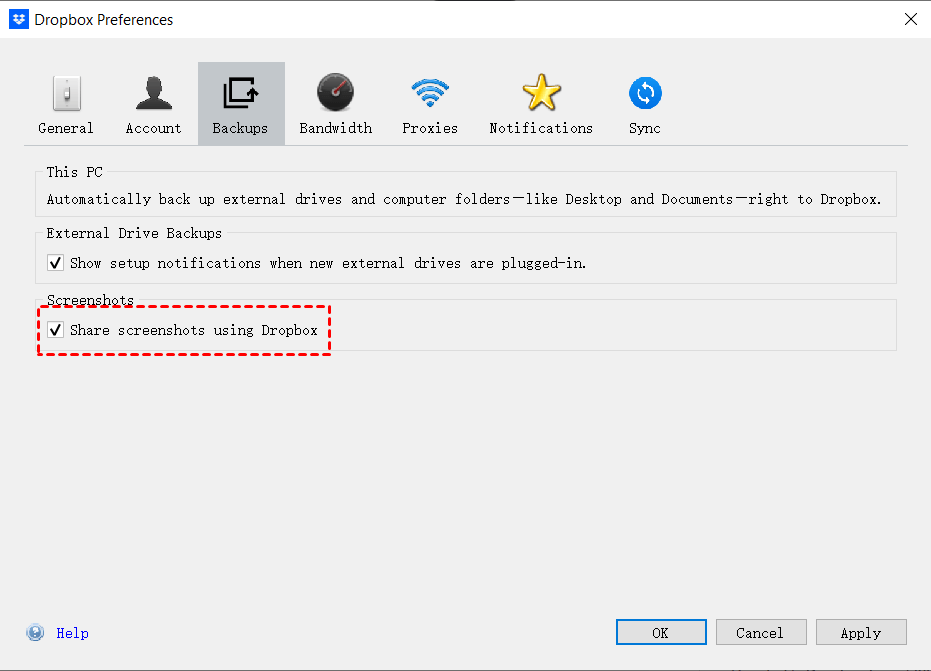 How to Turn off Dropbox screenshot

If you want to stop saving screenshots to Dropbox on Mac or Windows, you can just turn to the Dropbox Preferences and untick the Share screenshots using Dropbox option to prevent screenshots from being saved on Dropbox easily.

Another way to save screenshots to Dropbox with ease

What if Dropbox screenshot not working for auto save screenshots to cloud? You can turn to the powerful cloud backup software - CBackup with an auto sync feature for help. With this tool, screenshots, pictures, videos, documents, or even hard drives can be synchronized to Dropbox automatically.

CBackup key features
✈ It allows you to set up scheduled sync plans on a daily, weekly, or monthly frequency.
✈ It provides you with fast, safe, and stable file synchronization services.
✈ It can sync files to Google Drive, Dropbox, OneDrive, and other cloud storage services effectively.
✈ It provides cloud backup function to backup files to clouds including CBackup Cloud, Google Drive, OneDrive, and more for data protection.
✈ Moreover, it can backup Dropbox to OneDrive, Google Drive, FTP, and more clouds with simple clicks.

Step 1. Launch the CBackup desktop app and sign in.

Step 2. Select OneDrive on the My Storage screen and then click Authorize Now to warrant CBackup to connect with your OneDrive files.

Step 3. Go to the Sync tab, and tap Sync PC to Public Cloud.

Tip: If you click the Sync Public Cloud to Public Cloud button, you will switch to the web version of CBackup, on which you can create sync and backup tasks between clouds effortlessly.

Step 4. Edit the task name, and add your screenshot folder as the sync source. Then, choose a folder in Dropbox as the sync target location. 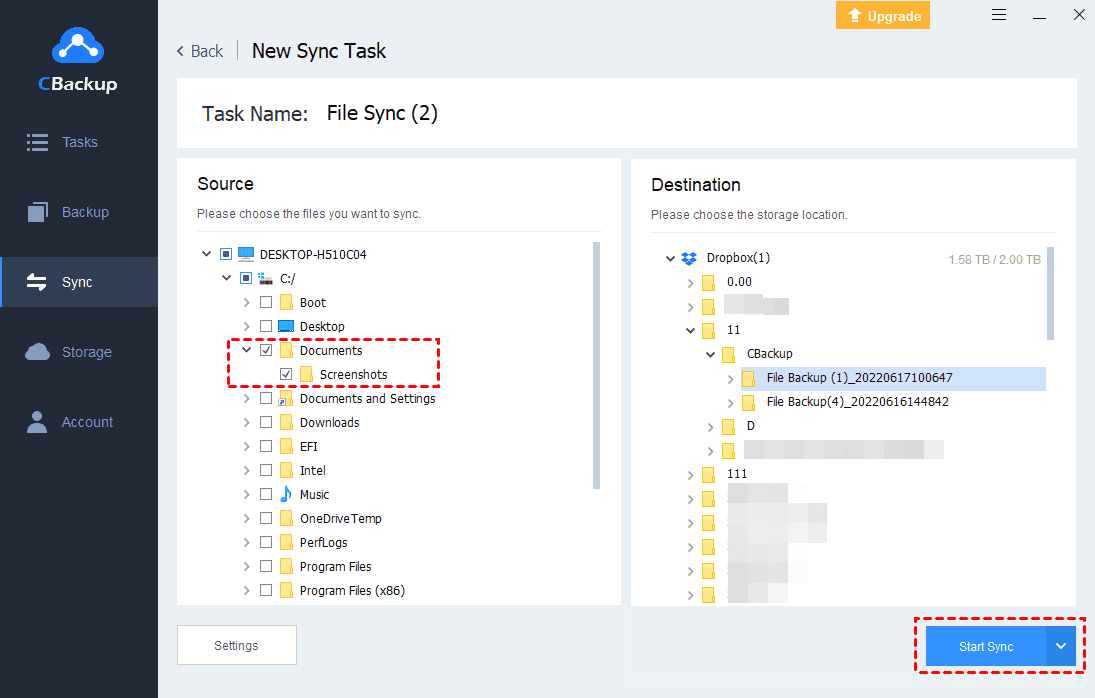 Step 5. Hit Settings to enable auto sync for screenshots by checking Set a Sync schedule for automated Sync under Scheduler.

Step 6. After that, click Start Sync to save screenshots to Dropbox simply.

How to get more Dropbox storage space for free

Syncing all screenshots to Dropbox may run out of your cloud storage quickly. If you need more storage space, you can use CBackup to combine cloud accounts and expand cloud storage for free.

Step 1. Launch CBackup, log in to it, and head to the My Storage section.

Step 2. Click + Add Cloud on the top, select the cloud drive you want to combine and complete the authorization. 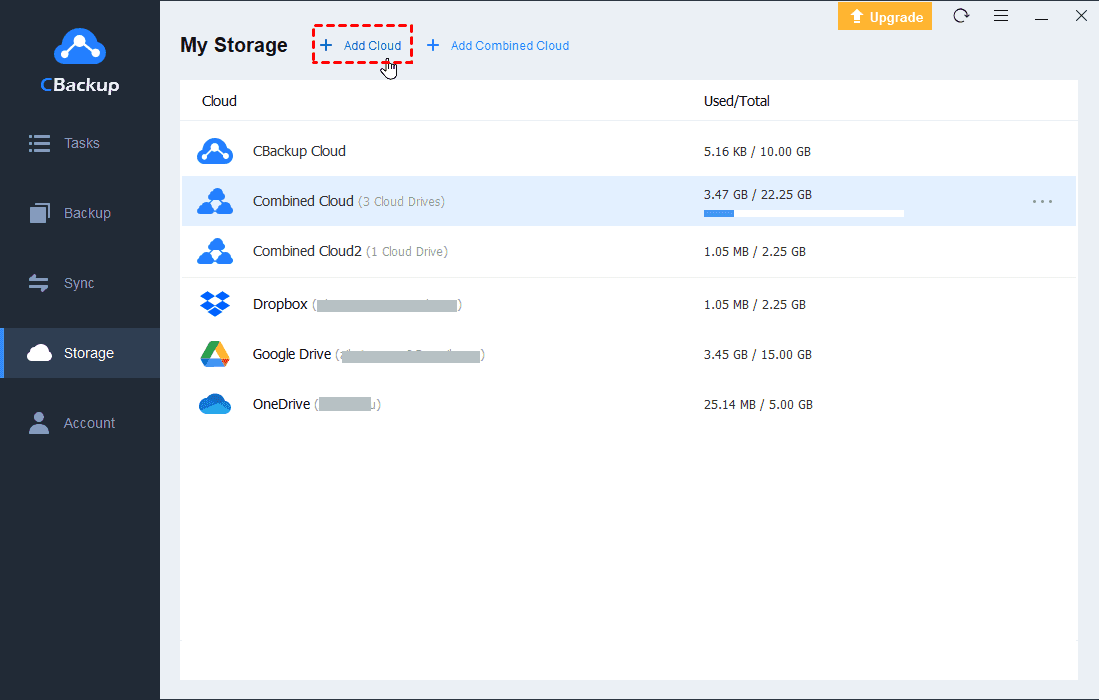 Step 3. After adding, tap + Add Combined Cloud, choose all the clouds you wish to merge, and click Next. 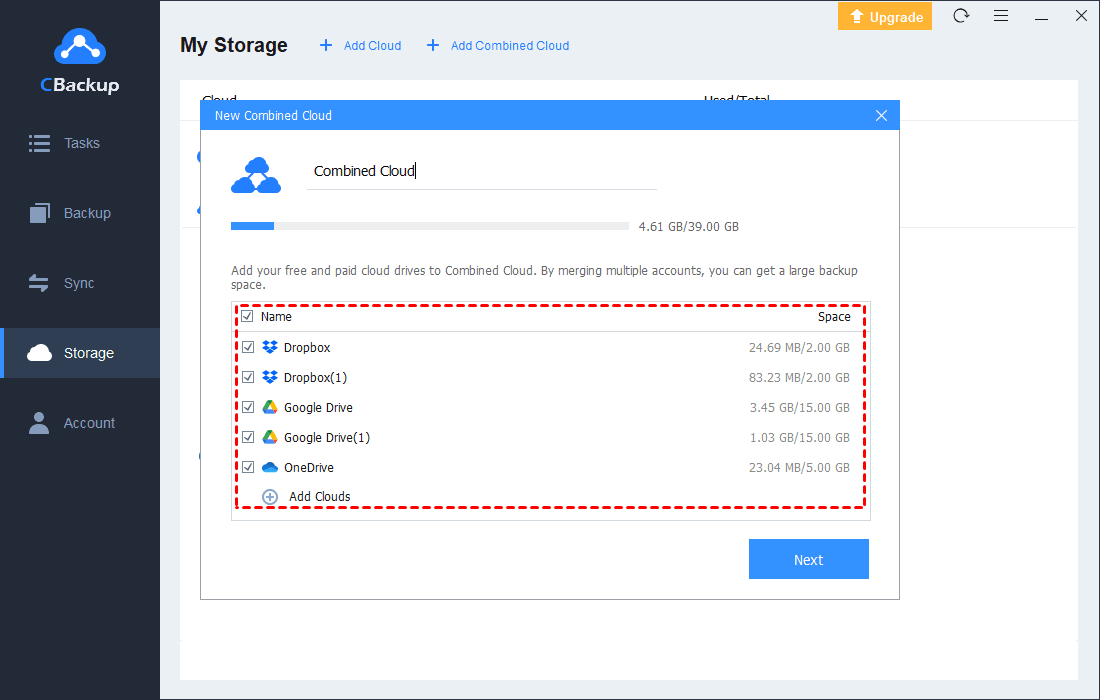 Step 4. Define the order of the clouds you use to backup files, and hit Combine. 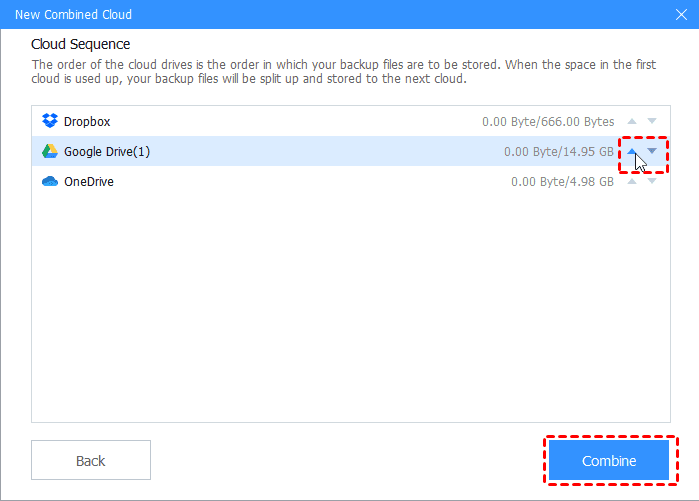 Now, all the selected clouds are combined. You can save data to the merged cloud by going to the Backup page and picking Backup PC to Combined Cloud.

Besides, you can use this utility to combine cloud accounts and get Dropbox 100GB storage or more at no cost.

You May Also Like
Solved | Dropbox Sorry This Type of Video Cannot Be Saved
How to Make All Dropbox Files Locally on Your Computer?
How to Move Files from Google Drive to Dropbox in 3 Easy Ways
3 Ways to Dropbox Automatic Sync Files on PC/Android/iOS
Fix Dropbox Can’t Sync, Not Enough Free Disk Space Error With Ease