How to Let Dropbox Ignore Folders and Files for Saving Space?

How to have Dropbox ignore folder from sync? This article will show you how to make Dropbox exclude and ignore folders for saving space.

How do I ignore a folder in Dropbox?

By default, Dropbox will directly sync all the local folders you selected on the device to the cloud. But each Dropbox account only has a free storage quota of 2GB. If you keep syncing all folders, your Dropbox personal account storage space will quickly be used up. Therefore, some users are looking for a way that Dropbox to exclude folder from syncing to save space.

Next, learn how to let Dropbox ignore folder from syncing in this article, and we will give specific steps.

How to let Dropbox ignore folders?

Currently, Dropbox does not provide the function of directly ignoring files/folders. To make Dropbox ignore the node_modules folder, etc., you need to create a symbolic link in the terminal.

Before learning the correct steps, you need to pay attention to the following points.

Follow the steps below to start setting the files or folders to be ignored by Dropbox.

Step 1. On your computer to open the Terminal application.

Step 2. Enter the following code in the pop-up window: xattr -w com.dropbox.ignored 1 /Users/yourname/Dropbox\ \(Personal\)/YourFileName.pdf. Change the folder path placeholder to the folder path you need to ignore, and then press Enter on the keyboard.

Step 3. Go to the Dropbox folder. If the icon next to the folder you need to ignore turns into a gray minus sign, it means it has been ignored.

Step 1. Click Start on the desktop and type powershell to open the PowerShell application.

Step 3. When the icon next to a folder in the Dropbox folder changes to a gray minus sign, it means that the folder has been ignored.

Step 1. Go to the Terminal application from the computer.

Step 3. Go to the Dropbox folder on your computer. If the icon next to a folder turns into a gray minus sign, it means it has been ignored.

✎Note: If you need that Dropbox excludes folders from photos, you can enable Dropbox Selective Sync, so you can select specific folders for synchronization, but not all of them.

What to do if Dropbox storage full?

When you back up your files to Dropbox, even if you set the Dropbox to ignore folder, you will only need to back up more and more important files, and the storage in your account may be exhausted quickly. We provide you with the following 4 effective tips to help you solve the shortage of Dropbox storage space.

First of all, we provide you with a way to get as much Dropbox backup space as possible for free. If you have multiple Dropbox or other mainstream cloud storage service accounts (such as Google Drive, OneDrive), you can use CBackup to merge the storage of these accounts into a large backup space for free.

When you authorize multiple cloud drives on CBackup, these accounts can be combined into a storage pool on this professional backup service. Not only can you make full use of the space of all cloud drive accounts, but you can also back up more data for free without setting Dropbox to ignore files or folders anymore.

Step 3. Modify the Display Name, and edit the Storage Path and Allocate Space, you should tick the Note option, and press OK.

If your backup demand is very large, CBackup provides a very cost-effective and safe and stable cloud server - CBackup Cloud, you can back up to a large space of 1000GB, why don't you start a free trial now?

Go to dropbox.com/gs and log in to your Dropbox account to access the interface. The screen will remind you of 250MB of bonus space. You can follow the steps and options to get more Dropbox space. 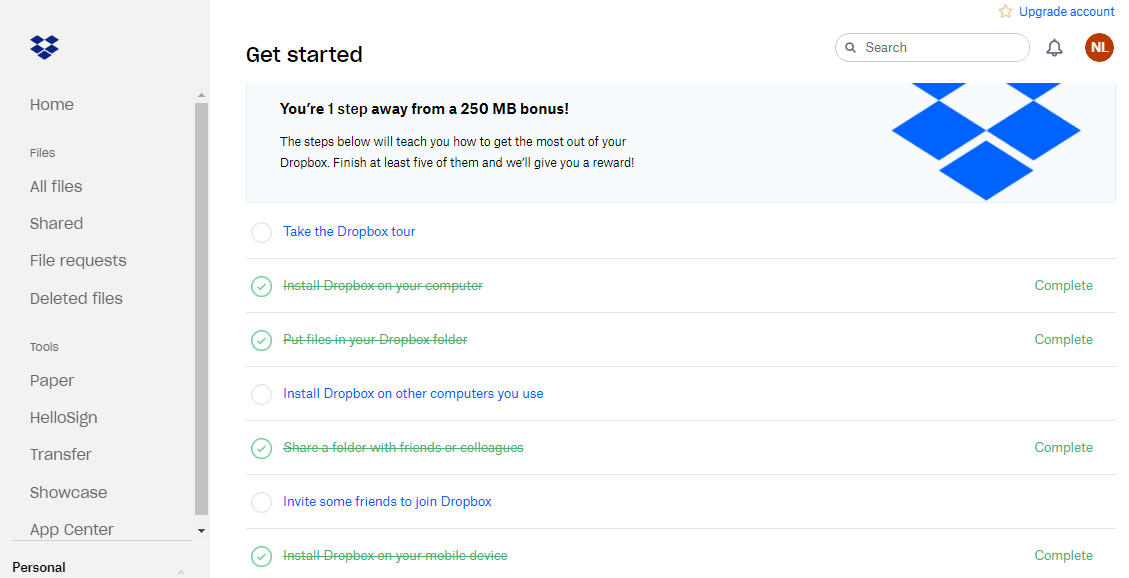 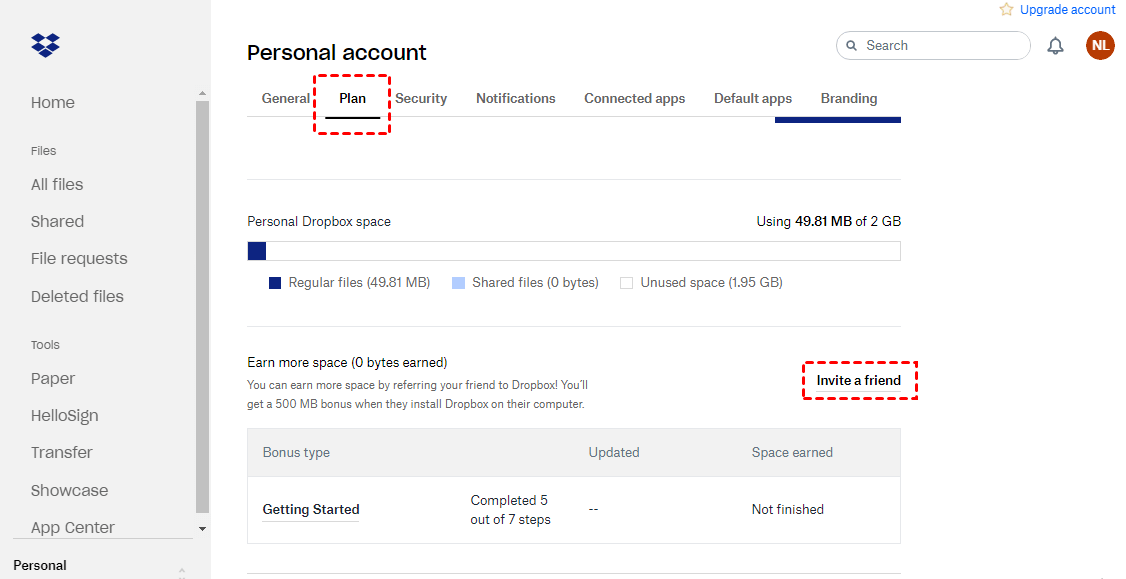 Step 2. You can expand the storage space of Dropbox up to 16GB. 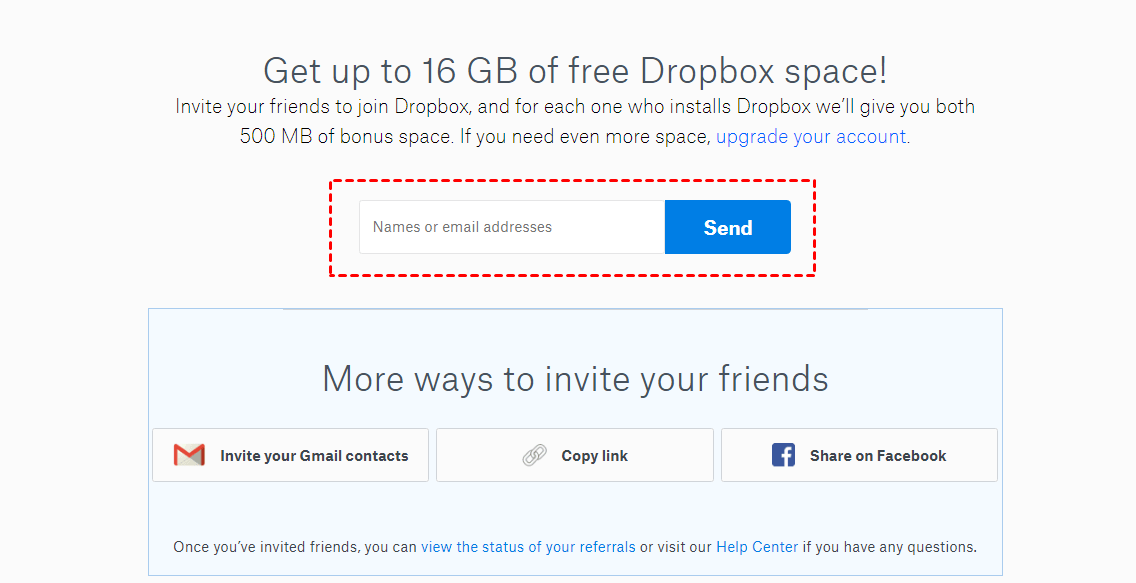 Step 1. When your Dropbox space is full, click the Dropbox icon on the desktop, it will prompt you Your Dropbox is full.

Step 2. Press the Upgrade hyperlink or button to upgrade Dropbox to release the storage limit. 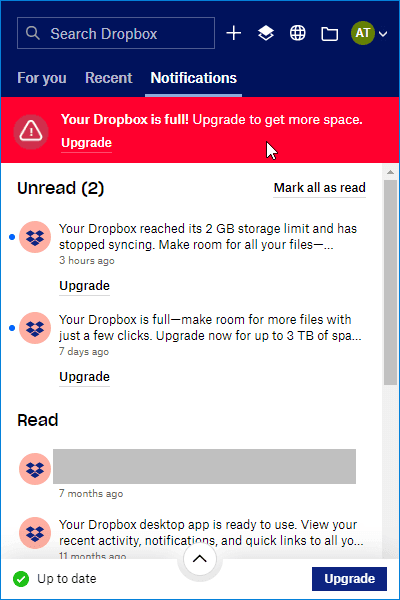 Step 3. Choose a Dropbox plan according to your backup need to upgrade.

If Dropbox syncs all files to the cloud, it will take a lot of storage. You can use the steps given in the article to make Dropbox ignore folders, so that only necessary files can be synchronized to save Dropbox space.

Besides, we have given 4 ways to expand Dropbox storage. It is most recommended that you use CBackup to combine multiple cloud drives to get a larger backup space. This method is free, safe, and does not limit the number of accounts added. You can even get unlimited online cloud backup space.

You May Also Like
How Do I Send Large Files via Dropbox? (4 Ways Here)
Take Dropbox Photo Backup From Android, iPhone, And PC
How to Resolve the Dropbox Selective Sync Conflict?
What is Dropbox Smart Sync and How to Use It? Quick Guide Here
How to Unsync Dropbox from Mac and PC? (3 Easy Ways)