You will learn how to create Windows 10 system backup with two free and easy methods and guides on how to restore a system backup below.

How do I do a system backup in Windows 10?

Although Windows 10 is the most stable operating system released by Microsoft, it is still prone to system crashes, virus intrusions, and other problems, which can lead to the loss of important files or even system failures. If you don't back up your Windows 10 system regularly, your system settings, installed programs, and even private files may be lost.

How to do a Windows 10 system backup? You can use the Backup and Restore backup program that comes with Windows to create a system image, or you can use a third-party solution to back up the system files. In this article, we will guide you in detail on how to complete backups for your Windows 10 system easily. 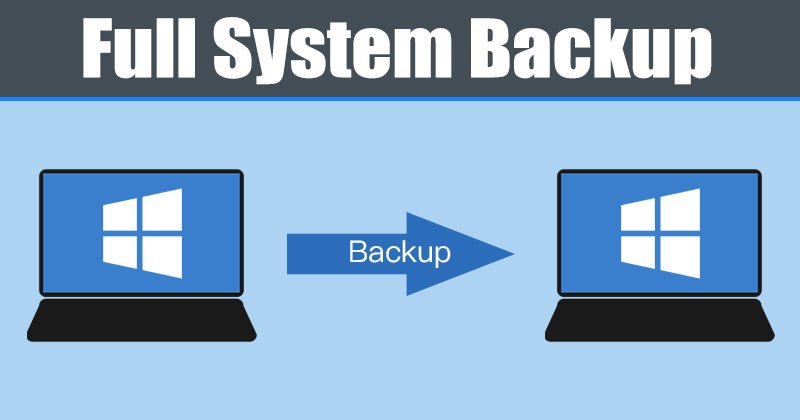 Why need to backup Windows 10 system?

Here are some of the best reasons to take a system backup in Windows 10:

How to create Windows 10 system backup and restore with Ease

You may have used Backup and Restore to back up your computer files, but did you know that it can also be used to create system backups? This software first appeared in Windows 7 and is now available in Windows 8, Windows 10, and Windows 11.

Step 1. Go to "Control Panel" and select "Backup and Restore (Windows 7)" under System and Security. 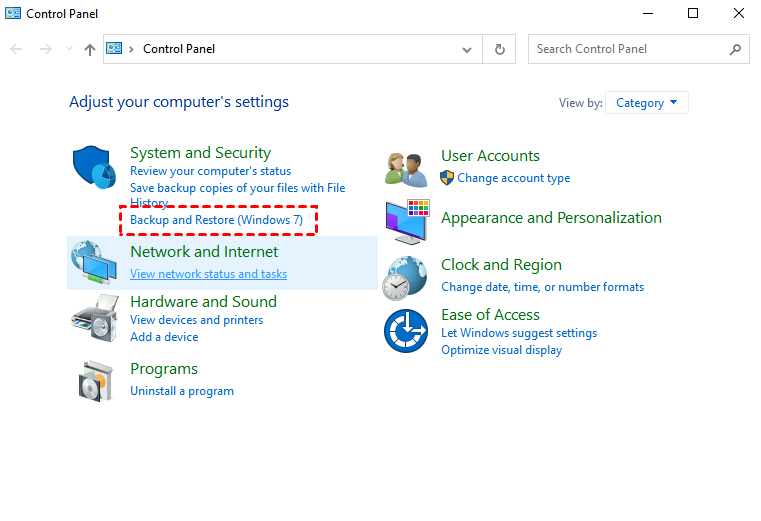 Step 2. Click on "Create a system image" on the left panel.

Step 3. Tick "On a hard disk", “On one or more DVDs”, or “On a network location” and select the target location. Then, click "Next". If you want to backup Windows 10 to USB drive, connect it to the computer beforehand. 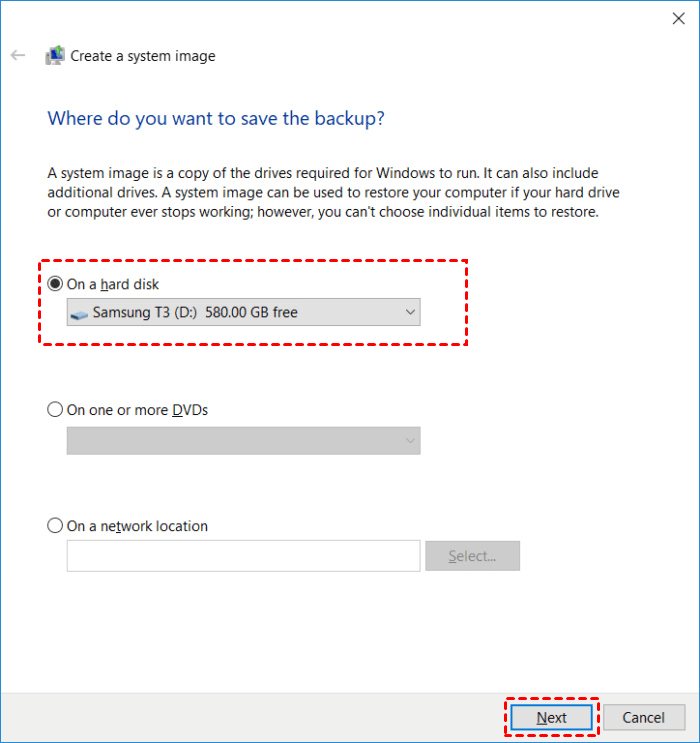 Step 4. Confirm the backup settings and click "Start Backup" to do a system image backup on Windows 10.

How to restore Windows 10 system images

The system image recovery process is complicated. Please follow the guide below carefully to complete your Windows 10 system recovery.

Step 1. Head toward Update & recovery under Windows 10 Settings, click Recovery > Advanced startup > Restart now in turn. Then, your computer will reboot to the Windows recovery environment. 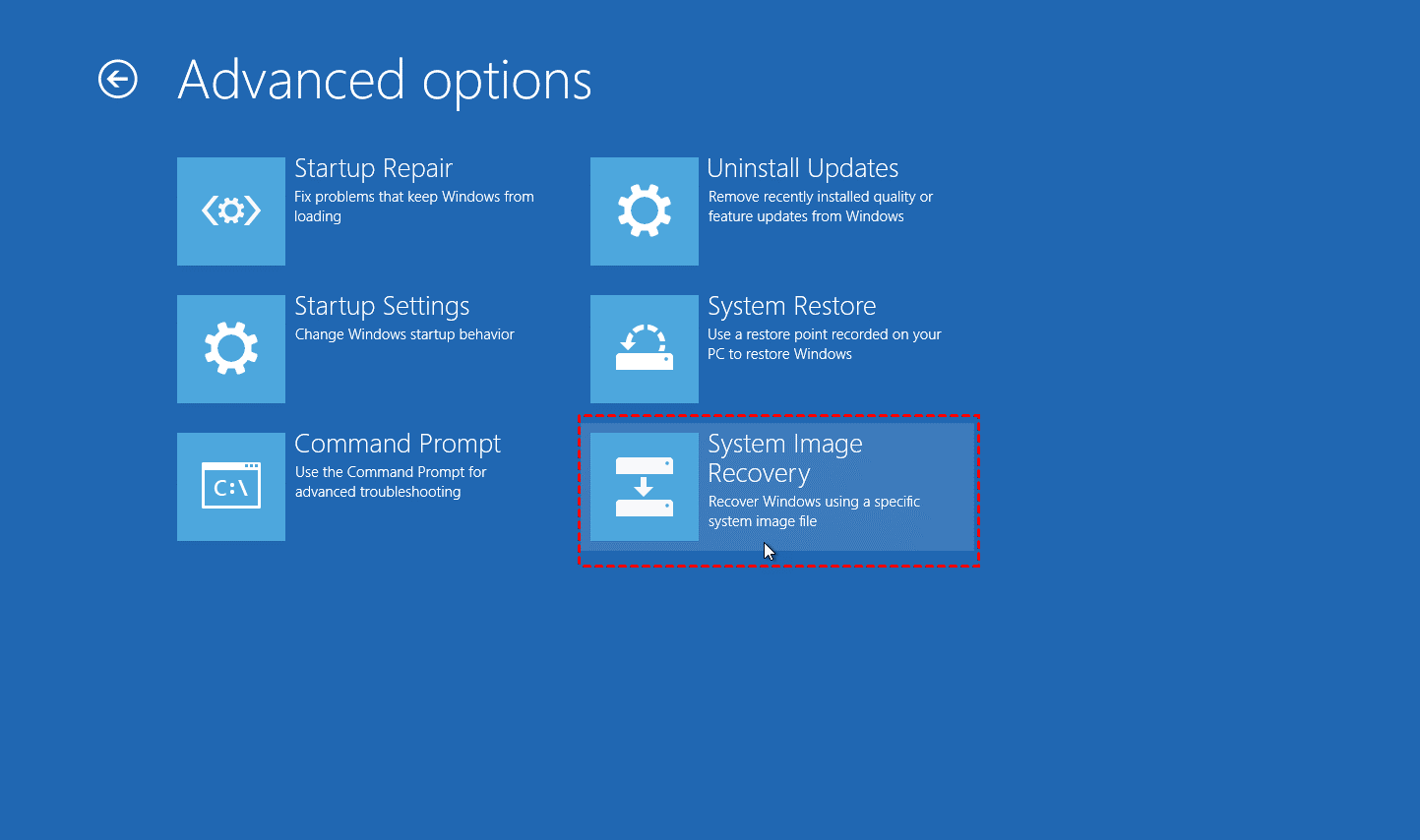 Usually, a complete system backup may take up a lot of storage space. Is it possible to back up individual system files? Sure! CBackup is a professional Windows free cloud backup tool that supports you to backup Windows to multiple different cloud storage services.

It allows you to backup the entire system hard disk, such as backup C drive to OneDrive, to create an image backup, and it also only supports you to backup only certain important system files. During the process of creating a system backup, you can enjoy the following advantages:

To create a backup for the Windows 10 system simply, you should follow the guide below:

Step 2. Tap My Storage on the left, select a target cloud, and click Authorize Now. Then follow the steps to grant CBackup to access your cloud files.

Step 4. Select the Windows 10 system files or the whole system C drive as the backup source, and choose the added cloud as the backup destination.

Step 5. Press Start Backup to create a Windows 10 system backup to the cloud without a hitch. 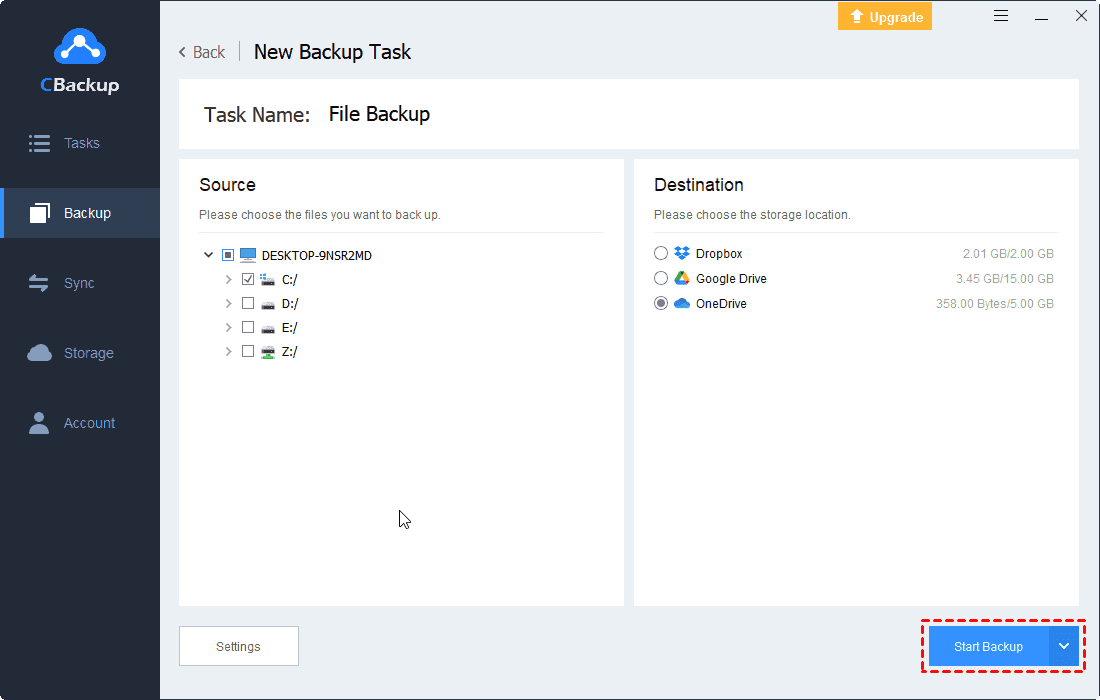 How to restore system backups of Windows 10

If your Windows 10 system fails, you can quickly and easily restore your backup system files by following the steps.

Step 1. Run the CBackup app. Locate the backup file and tap on the three-dot button > Restore. 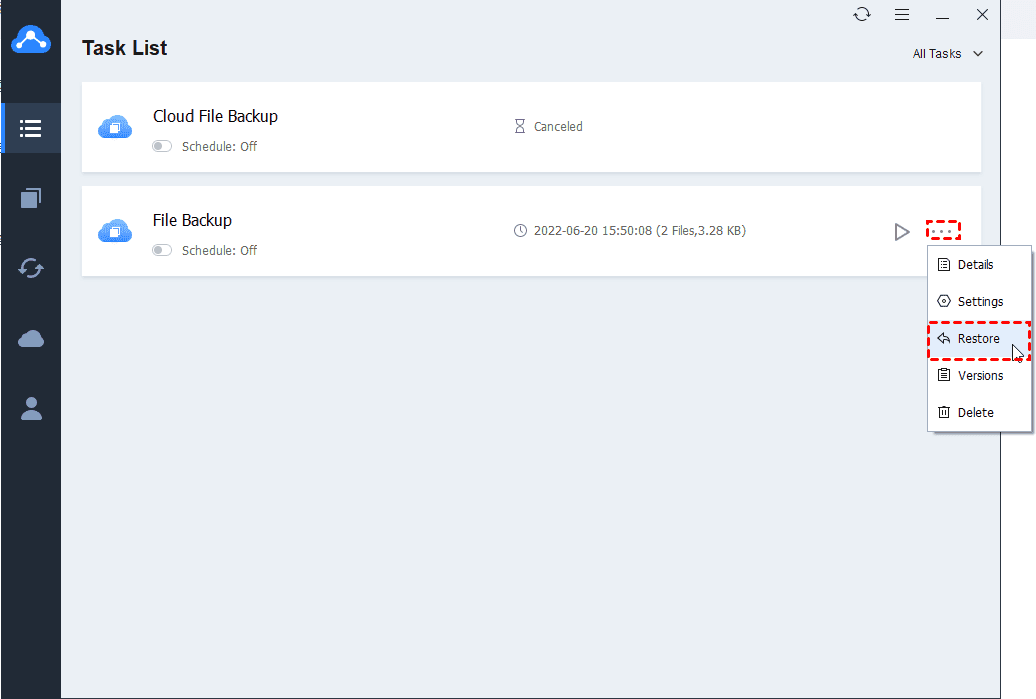 Step 2. Choose the needed files to restore and specify to restore backup to the original location or a new location. 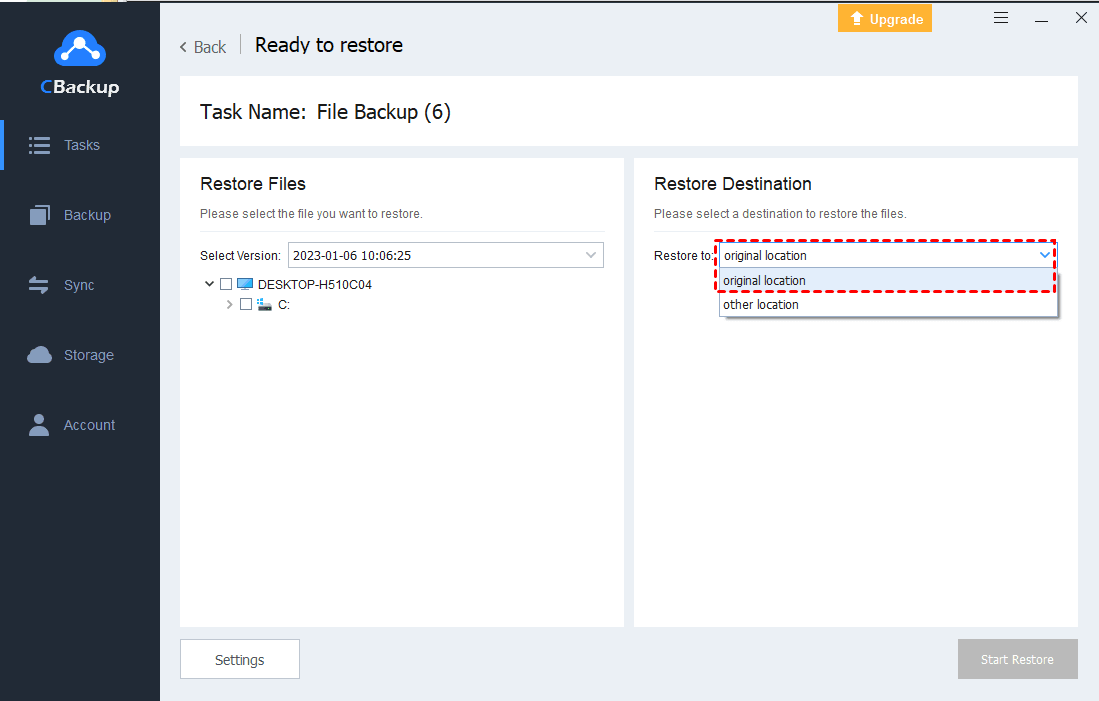 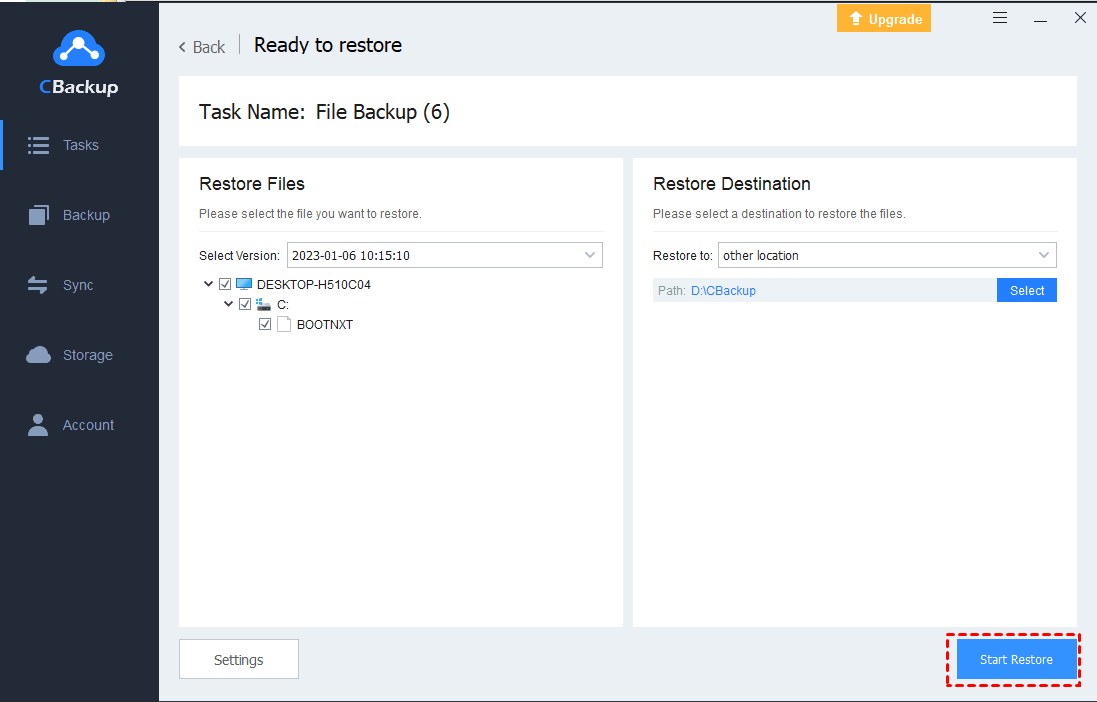 That's all for a detailed guide on creating a Windows 10 system backup and how to restore it. While it is possible to create a system backup using the Windows 10 built-in Backup and Restore software, it backs up all system contents, which is time-consuming and takes up disk space. To selectively backup system files, the best way is to use the professional Windows backup service - CBackup. It lets you use incremental backups to back up only modified files.

Also, it is a cloud-to-cloud backup tool. With it, you can move files between cloud storage easily and quickly without uploading and downloading files or being limited by file size.