How to Upload Folder to Google Photos with Ease? (3 Ways)

Wanna learn how to upload folders to Google Photos? This tutorial will show you 3 methods to make Google Photos upload photos and folder, and introduce a tool called CBackupper to help you get more Google Drive backup space for free.

“How do I upload an entire folder to Google Photos?”

“I have a folder called 2010 which has a ton of subfolders with dates (e.g. 2010-01-05, 2010-03-06, etc.) which are full of photos and videos. I want to drag all these photos to Google Photos and in the end, make an album called 2010. I tried dragging the folder to the browser (like I would drag a photo into it), but nothing happens. So is it possible to upload folders to Google Photos?”

Can you upload an entire folder to Google Photos?

Google Photos is one of the most popular photo storage and backup tools. It has an excellent interface, some good navigation skills, and a smart search, so you can find images by location or objects in it. And, no matter which device you are using, computer, Android device, or iOS, Google Photos can store all images safely.

How to upload folders to Google Photos?

Way 1. Add folders to Google Photos from the phone

The Google Photos upload folder from the phone can be done directly in its application, just follow the steps below. 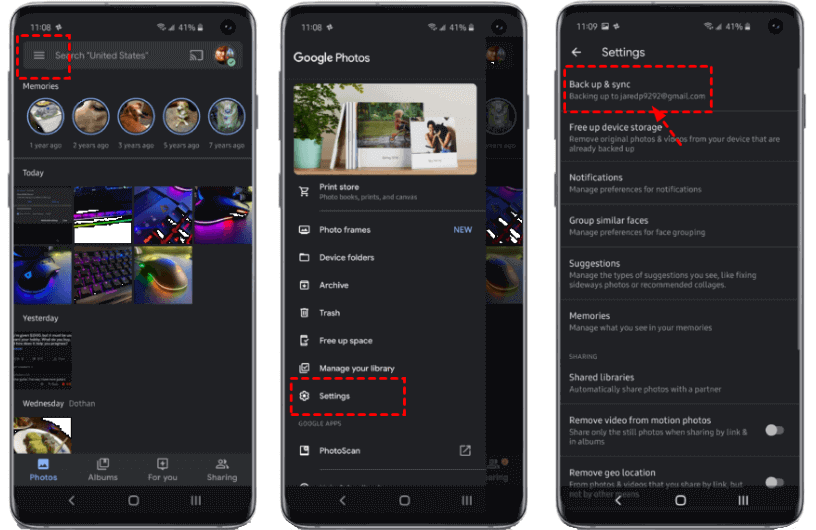 Step 3. Tap Back up device folders, the photo folders that can be backed up in the device will be listed, toggle the switch behind the folder to be uploaded.

Way 2. Upload folders to Google Photos from the PC

Although you cannot add folders on the Google Photos web application, you can do this through the desktop application Google Backup and Sync.

Step 1. On your computer, download and install Google Backup and Sync. 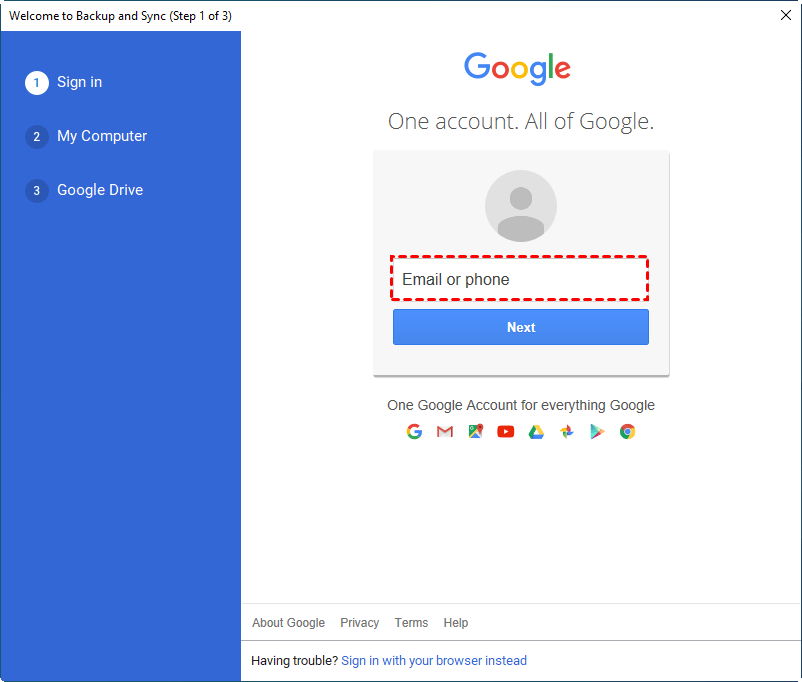 Step 3. Click CHOOSE FOLDER and select any folder you want to backup. 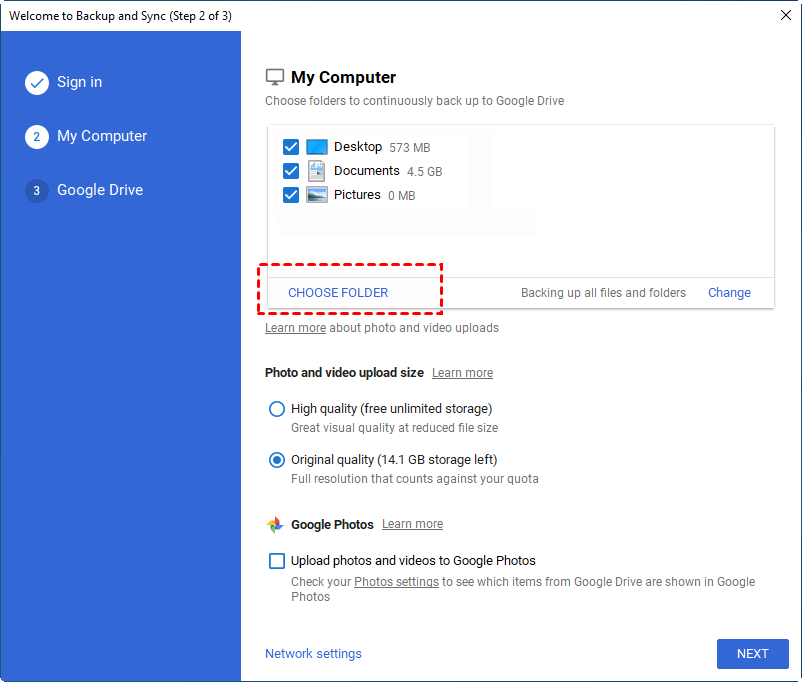 Step 5. In the next step, you can also choose whether to sync the files in Google Drive to your computer and finally click START to add the folder to Google Photos. 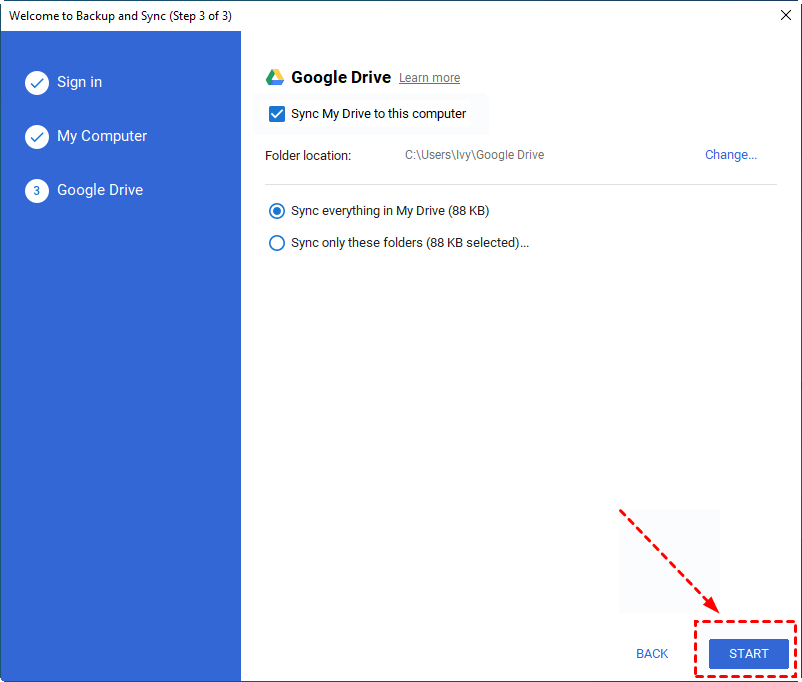 How to add folders to Google Photos from Google Drive, even with different accounts? You can use some free services to transfer folders, such as MultCloud.

Step 2. In its main interface, click the Add Clouds tab on the top and select Google Drive and Google Photos.

Step 3. Create a Cloud Sync task to move photos between Drive and Google Photos. Specify the folder to be moved as the source in Google Drive and select the destination location under Google Photos.

How to create and upload albums to Google Photos?

Many users upload photo folders to Google Photos as albums. In fact, you can also create photo albums directly on Google Photos, and you can easily complete them by entering the Google Photos website through a browser. Let's learn the following steps.

✎Note: If you already have albums in Google Photos, they will also be displayed under Albums, and the Create album button will appear in the upper right corner of the interface. Click to continue creating new albums.

Step 2. Add a title to your new album, then click Add photos to select the photos you want to move to this album from the local area, and then click Done.

Step 3. You can edit your album, such as deleting the photos in it, Rename album, Share album, Delete album, etc.

Get more Google Cloud space for backing up photos

Google Photos is indeed a good solution for storing photos, but if there are too many photos and videos that need to be uploaded in original quality, its free 15GB is far from enough. (Google Photos and Google Drive share the space in the same account.) The long-term purchase of storage space may be a relatively large payment. However, you can use CBackupper to help you get more Google Drive space for free.

CBackupper is a professional cloud backup tool, which supports the combination of free space in multiple cloud drive accounts for data backup. You can combine multiple Google Drive accounts, and enough accounts can even form Google Photos unlimited storage.

Step 2. In its main interface, click the Clouds tab at the top, click Add Clouds and then select the cloud you want to add (here is Google Drive). Then, follow the simple instructions to complete the authorization.

Step 3. You can change the display name to distinguish the account, and click Allocate to allocate the backup space, don’t forget to click OK to save your options.

Step 4. Repeat Step 1 to Step 3 to add all your cloud drive accounts. Spaces in different service accounts can also be combined, and the total space formed by them will be displayed under My Clouds.

What's more, CBackupper also has a desktop tool which as a useful offsite backup solution, it can help you backup files from your computer to a large backup space - AOMEI Cloud (1000GB), and you only need to cost $6.00 per month or $60.00 per year. CBackupper provides a 15-day free trial as long as you register a CBackupper account. And the data in CBackupper will be retained for 7 days when the 15-day trial is over, you can restore the backups in AOMEI Cloud within 7 days.

Following one of the above methods, it can help you upload folders to Google Photos, regardless of whether you are using a mobile phone or a computer. If there is not enough space for storing photos during the process of using Google Photos, I strongly recommend that you use the CBackupper to merge the cloud drive accounts to combine the space freely for backing up photos.

You May Also Like
Solution to Transfer Google Photos to Amazon Photos
Lost Photos on Google Photos: Why It Occurs and How to Recover It?
Let’s Fix Google Photos Upload Stuck (7 Methods)
How to Easily Upload Files to Shared Google Drive in 3 Ways?
How to Backup SD Card to Google Drive from Android or PC?

Combine FREE Clouds to Protect Your Files with CBackupper